The pal of her fiancee, Russell Brand, is invited to attend the nuptials, but he isn't sure the marraige is a great idea. 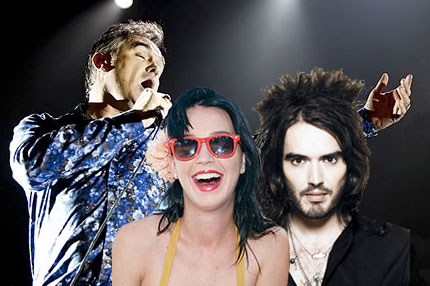 Morrissey’s songs might not be the most upbeat, lyrically, but the man sure can croon — and he looks great in a suit — so it’s no surprise that Katy Perry and Russell Brand, who’s a pal of the Moz, would love to have him perform at their upcoming nuptials.

“It’s going to be a small ceremony, so I don’t think we’ll have a proper band,” Perry tells U.K. tabloid The Sun. “I’d love to have Morrissey.”

Pop star Perry (whose album Teenage Dream drops August 24) and actor-comedian Brand (who’s filming a reboot of Arthur in NYC) are reportedly tying the knot this September in India. Perry recently met Morrissey for the first time, and chatted about the upcoming wedding over tea.

But the Moz, an invited guest to the affair, wasn’t too supportive about the idea of marriage. “[Morrissey] swooned and sighed, ‘Oh, left hand third finger, don’t do it,'” Perry says. “It was just so eloquent and poetic and like one of his songs.”

Not a shocker coming from the Pope of Mope, though: Morrissey made his opinions on relationships very clear in a 2004 SPIN interview with Marc Spitz. “I don’t believe in that at all,” he said, when asked if he thought he’d one day meet a special someone who’d change his life. “I don’t actually believe in, as you so eloquently term it, ‘one day.'” Instead, he said he’d rather devote his time to animal rights causes: “I still prefer horses to human beings.”