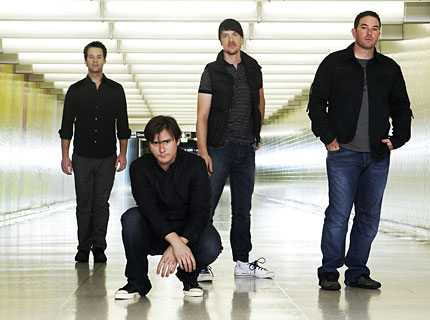 “Are you listening? Whoa, whoa, whoa whoaaaaaaaaaa!!!” Yes. Yes, we are. And on September 28, Jimmy Eat World fans will have something all-new to listen to: Invented, the Arizona pop-punk vets’ seventh full-length record and follow-up to 2007’s Chase the Light.

The news was unveiled in a brief post to the band’s website Monday: “[We’re] back with producer Mark Trombino (Clarity, Bleed American) — we made noise and laid down the tunes in our Arizona studio. Touring plans coming your way soon!” The band also posted the new album’s cover art. Check it out below.

The album’s first single, “My Best Theory,” will hit radio in early August.

If past shows are any indication, fans should be eager for their upcoming tour. In 2009, SPIN’s Peter Gaston reviewed the band’s 10th anniversary performance of Clarity in New York City. “Their reliance on substance over style always allowed their songs to hold the spotlight,” he wrote, adding that the band was emo’s “mothership.”

In related news, Jimmy Eat World have joined the protest against their home state’s recently passed immigration law, SB 1070 and HB 2281, by teaming up with Artists For Action, an organization which encourages artists to voice their opinions against the controversial law.

Are you excited for Jimmy Eat World’s new album? Tell us in the comment section!

Jimmy Eat World: How Rage Against the Machine and Van Halen Inspired Their New Album