PLUS: Win tickets to their upcoming club shows. 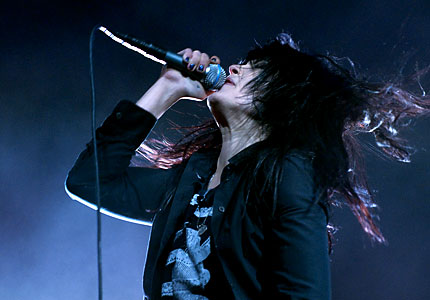 The Dead Weather kicked off their summer club tour Wednesday night at the 9:30 Club in D.C. (check our review here) — and to help you get amped for the rest of the dates, SPIN is streaming an exclusive live cut from their dynamic set at Coachella in April.Listen to Jack White and Co. perform “Blue Blood Blues” off their recent album Sea of Cowards below!

“The band fed off each other’s energy during the 14-song set — taking the tunes from a whisper to a scream, and packing each one with a feeling of religious fervor,”SPIN’s Liam Gowing wrote of their Coachella performance.”From the count-in of the first song, a cover of ‘Forever My Queen’ by Virginia doom-metal band Pentagram, it was clear that Jack White and his bandmates intended to take their audience on a ride to the dark side.”

Now, the band is headed around the country for a series of club dates. Want to catch them live? Click here to find out how you can win tickets to see the Nashville rockers at one of seven upcoming shows!

Are you planning on checking out any of the Dead Weather’s shows this summer?Let us know in the comments section below!