Hear "All Summer," a unique teaming of three hot musicians who are part of a Converse series. 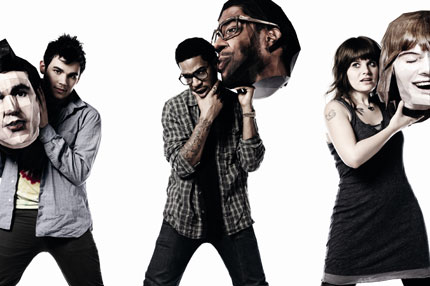 Rapper Kid Cudi, Vampire Weekend guitarist-producer Rostam, and L.A. surf rockers Best Coast were already making waves on their own this summer, but now they’ve joined forces in the studio to record a unique collaboration called “All Summer.” Hear it exclusively below!

The track pairs Cudi’s laid back flow with a sweet-sounding but melancholy hook from Best Coast’s Bethany Cosentino, and it’s all held together by Rostam’s production, which borrows a bit from Vampire Weekend and a bit from LP, the 2009 album he recorded with Ra Ra Riot’s Wes Miles under the Discovery moniker.

“When you throw three creative people together it can be tough and nerve-racking to get the artistic gears going,” said Kid Cudi. “But we ended up vibing really well and I was totally pleased with the end result.”

The song is part of Converse’s Three Artists, One Song series, where three acts come together in the studio to write and record a new song. The first installment emerged in 2008 when Pharrell Williams of N.E.R.D., Santigold, and Julian Casablancas collaborated on the track “My Drive Thru.”

Stream the tune here, watch some footage of the trio in the studio, and tell us what you think in the comments section. You can download it for free via Converse’s website.