The Messenger's Oren Moverman talks about the late Nirvana frontman. 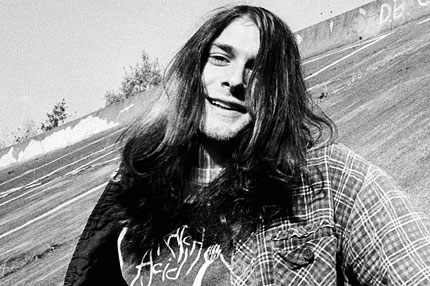 Oscar-nominated writer-director Oren Moverman (The Messenger) has spoken out about his Kurt Cobain biopic, currently in development, which he promises won’t be a typical Hollywood version of the late Nirvana frontman’s life and career.

“It’ll be raw and chaotic, which is what Cobain’s life was like,” Moverman told Ryan Gilbey, a film writer for the U.K.’s Guardian. “People know the shortcut version — he took a lot of heroin, wrote ‘Smells Like Teen Spirit,’ became the biggest rock star in the world and killed himself. Those known things about him are to me the least interesting.”

The Israeli director, who earned his Oscar nod for co-writing the non-traditional Bob Dylan biopic I’m Not There (which used six actors to depict six different periods in the musician’s life), promises a more straightforward take on Cobain. “It’s more linear than I’m Not There; it’ll take you from A to Z,” he says. Cobain’s widow Courtney Love will executive produce the film, which is based partially on music scribe Charles R. Cross’s 2002 biography Heavier Than Heaven.

Who will actually play Cobain in the film remains undetermined. In April, Twilight heartthrob Robert Pattinson was reportedly in the running to play the rock legend, but Love’s manager responded, saying, “That’s an amazing story, and the first I’ve heard of any of this.” A week later Love added that rumors of RPatz’s involvement were “stupid,” inciting a bit of a feud between the two celebs. Pattinson recently replied, saying that the idea of him playing Cobain was “ridiculous,” and he saved a few choice words for the Hole singer.

“[I] see all these comments, like from Courtney Love, saying ‘What the fuck! He’s totally wrong for it,'” Pattinson said. “And I’m like, ‘I fucking said no, you dick!’ I didn’t get offered it. For one thing, I’m too tall, and I can’t sing like him, I’m nothing like him! It’s ridiculous.”

As for Love’s role, her manager said, “Courtney likes Scarlett Johanssen as an actress and as a person, so it wouldn’t surprise me if she wanted her to play her.”