The Dead Weather Kick Off Club Tour in D.C. 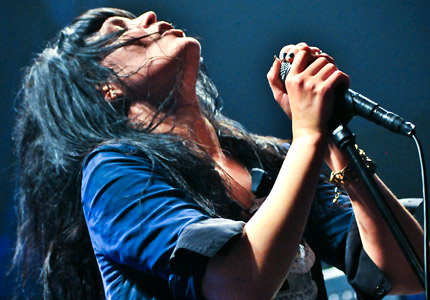 It was a full-on pagan rock’n’roll ritual. The altar: one of the best rock venues in the country, Washington’s D.C.’s 9:30 Club. Onstage, four stuffed goat’s heads were mounted on the Dead Weather’s lighting gear, staring out at the sold-out room. A giant glowing eye, a trick of painted curtain and clever light, peered down at the room from near the rafters. Smoke hissed out from sidestage, hanging a milky haze through the crowd.

So began the Dead Weather’s summer club tour. The opening song was “60 Feet Tall” from the band’s debut album, Horehound, which began with a bluesy guitar lick repeated mechanically against rim shots from White, while Mosshart sang, “You’re cold and dangerous” while looking very cold and very dangerous herself.

Later came a breathtaking one-two punch with the sharp blues hook of “So Far From Your Weapon” and the heavy “I Cut Like A Buffalo,” Mosshart becoming a twirling demon — arguably rock’s most compelling frontwomen.

By the time the 75-minute set hit the long-form version of “Will There Be Enough Water,” whatever is inside of Jack White that makes him play guitar had built into an utter flood of shredding, a bizarre mash of discordant strum and lyrical riffing. His slowly building blues licks (the audience seemed to hang on every one) rose again and again to grand rock climaxes, until White and Mosshart were at the front mic together, so close they could have been kissing.

The band played three songs as an encore, surprising not a soul that one was “Blue Blood Blues,” off the recent Sea Of Cowards — a frenetic beast of a song with the choice line rattled off by White in fine overcaffinated style: “Shake your hips like battleships/ All the white girls trip when I sing that Sunday service.” White’s pagan ritual, indeed.Listen: Exclusive Dead Weather live track “Blue Blood Blues”

Michael Byrne
Tags: Alison Mosshart, jack white, the dead weather, We Were There