Daft Punk’s ‘Tron’ Soundtrack Due… When?

The duo gets ready to release their first new music in a while. But when will it drop? 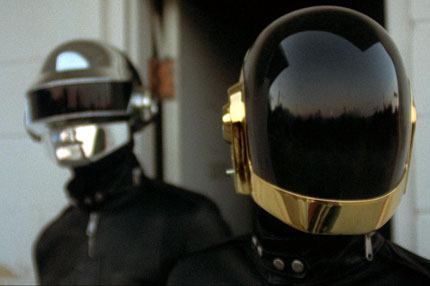 Daft Punk, the electro duo of Guy-Manuel de Homem-Christo and Thomas Bangalter, a.k.a. the two French dudes in robot helmets, recorded the soundtrack for the upcoming film Tron: Legacy, the sequel to the 1982 sci-fi flick Tron. Perfect match, right? Yep, and it gets better: According to a post on Amazon, the soundtrack is set to drop November 23, some three weeks before the film’s December 17 release.

But a spokesperson for the duo tells SPIN.com that no release date has been set. Has Amazon slipped up yet again? We’ll see. No other details about the album were provided.

In related news, SlashFilm reports that Daft Punk may preview material from their soundtrack at San Diego’s Comic-Con, July 22-25, but says it will come in the form of a listening session or new movie trailer. Variety, meanwhile, adds that Daft Punk may actually perform their new music at Comic-Con.

Just in case you’re not familiar, Tron: Legacy tells the story of Sam (Garrett Hedlund), the son of original Tron protagonist Kevin Flynn (Jeff Bridges), as he embarks on a quest to find his father, who has been stuck in the cyber world for 28 years (since the first release of Tron).

Back in March the film’s trailer leaked, complete with Daft Punk’s first new music since their 2005 release, Human After All. Watch it here.

Are you excited to hear Daft Punk’s Tron: Legacy soundtrack? Tell us in the comment section below!