"It's going to be very much the same as [Back to Black]," the oft-troubled singer says. 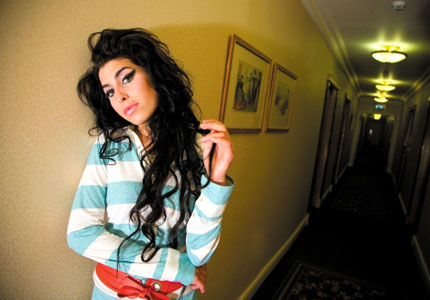 The wait for a third album from oft-troubled British singer Amy Winehouse might be over by the end of the year.

“The album will be six months at the most,” Winehouse told London’s Metro this week at the premiere of horror flick Psychosis, directed by her new boyfriend Reg Traviss.”It’s going to be very much the same as my second album, where there’s a lot of jukebox stuff… I just can’t wait to have some new songs [to perform] on stage.”

It’s been nearly four years since Winehouse’s career-making, Mark Ronson-produced Back to Black was released, beginning a stretch that ranged from amazing highs (five wins on Grammy night in 2008) to some horrific lows (the singer’s very public battles with substance abuse, her destructive marriage to Blake Fielder-Civil). Read more in SPIN’s July 2007 cover story.

Not surprisingly, skepticism abounds. Ronson told the The Sun that although Winehouse’s record label was also promising a new album by the end of the year, he has his doubts. “Amy hasn’t been working on her next record,” Ronson said.”When she’s got 10 songs then we’ll go down to the studio together.”

“Mark and I recorded two versions of Valerie,” Winehouse later explained.”We released the one that came out like the Supremes but I play the other version with my band. When I got there I completely forgot it was his version we were singing so I was probably a bit out of sync.”

While we wait for new original music from the songstress, Ronson reported that he and Winehouse have recorded a “brilliant” cover of Lesley Gore’s 1963 classic “It’s My Party” for a Quincy Jones tribute album, which is coming out “fairly soon.”