Why They’re Called… We Are Scientists

The quirky Brooklyn-based dance-rockers share the story behind their name. 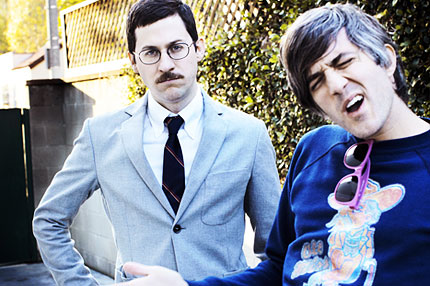 This week: We Are Scientists, whose new album Barbara is out June 15.

Why We Are Scientists: “We got the name not long after graduating from Pomona college in 1999,” recalls singer-guitarist Keith Murray. “[Bassist] Chris Cain, me, and my friend Scott, who we started the band with, had moved up to San Francisco from L.A. County. We were returning the U-Haul trailer that we’d rented for the move. As we were sitting there watching the U-Haul guy inspect the trailer to make sure it was still in good condition, we could see him glancing at our stuff suspiciously. At the time we all had glasses and buzz cuts and just generally sort of looked like jackasses. So when the guy was done the inspection, he asked if we were brothers. We told him we weren’t. And his next question was whether or not we were scientists. We were never able to shake the idea that some random guy thought we were scientists.”

Previously Rejected Names: “They really weren’t any — the name literally begat the band. The three of us were sitting at a bar in Berkeley thinking about how good it would be to be called We Are Scientists. Part of the plotting even involved writing a bunch of titles for songs that didn’t exist yet. One was ‘Mothra Vs. We Are Scientists.’ We had another one called ‘The People Want Clooney.'”

Best Band Names Ever: “I always liked Oxford Collapse. Something about that name suggests there’s a good story behind it.”

Worst Band Name Ever:“I pretty much hate any band that’s called ‘The’ something. Who gives a damn about a random noun? I want a designation!”