Electro-pop pioneers play "Fresh," of their SPIN-approved album, their first new material since 1990! 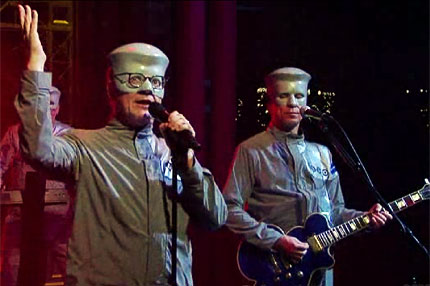 Looks like Devo still knows how to whip it, and whip it good.

On Tuesday night, the grey-masked madmen took the stage on The Late Show with David Letterman and performed “Fresh” off their new SPIN-approved album Something for Everybody, their ninth record and first since 1990. In our review, editor Doug Brod boasts that Devo shows “dancey electro-pop pretenders how it’s done — syn-drums and all.”

During the Letterman performance, the quintet did just that, bringing the world a revitalized New Wave sound with their pulsing, electronic beats and robot-like choreography. It looked like they haven’t lost a step in their three decades together. The only differences: they’ve traded their trademark red energy dome hats for curvy, gray facemasks, and the hair peeking out from behind those masks is a little bit gray.

Watch Devo’s performance of “Fresh” here, and tell us what you think in the comment section below!