The indie kings unveil The Suburbs tracks for 50 lucky fans in Montreal! 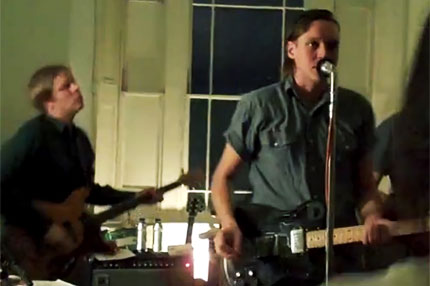 Arcade Fire played their first live concert in a while Friday night at an old mansion in their hometown of Montreal. Their audience: about 50 very lucky fans, who watched as the band debuted tracks from their August 3 release The Suburbs. Thankfully, someone shot video — watch it below.

Arcade Fire unveiled eight new tracks at the tiny gig, including “The Suburbs” and “Month of May,” recently released on their EP, plus “Ready to Start,” “Empty Room,” and “Rococo.” Check out a picture of the set list here.

According to blogger Said the Gramophone, one of the lucky few at the gig, the new Arcade Fire songs sounded “sharper” and “tighter” than ever and explored new directions: “They no longer sound anything like their imitators, and if once they evoked Bruce Springsteen, U2 or the Talking Heads, on Friday I heard the Clash, New Order, Clues and Big Star.”

But the set wasn’t all newbies –the group performed a few classics, too, including “Keep the Car Running,” “Tunnels,” and set-closer “Wake Up.”

Watch video of the show below, then tell us what you think in the comment section!