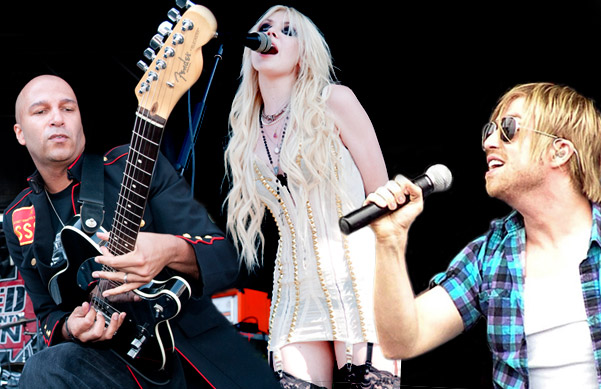 The Vans Warped Tour blew out 16 candles Friday, making it older than a good portion of the 12,000 fans who attended the opening date on the 42-city summer tour. The sun-splashed Home Depot Center in Carson, Calif., was a sea of colorful Mohawks, tween screams, father-and-son moshers, F-bomb-laced T-shirts, and vendors hawking every imaginable article of punk gear. Oh, and you can bet your $5 pair of sunglasses there was music too.

The Vans Warped Tour blew out 16 candles Friday, making it older than a good portion of the 12,000 fans who attended the opening date on the 42-city summer tour. The sun-splashed Home Depot Center in Carson, Calif., was a sea of colorful Mohawks, tween screams, father-and-son moshers, F-bomb-laced T-shirts, and vendors hawking every imaginable article of punk gear. Oh, and you can bet your $5 pair of sunglasses there was music too.

3.Best Performance by a Stylist in a Supporting Role: The Pretty Reckless 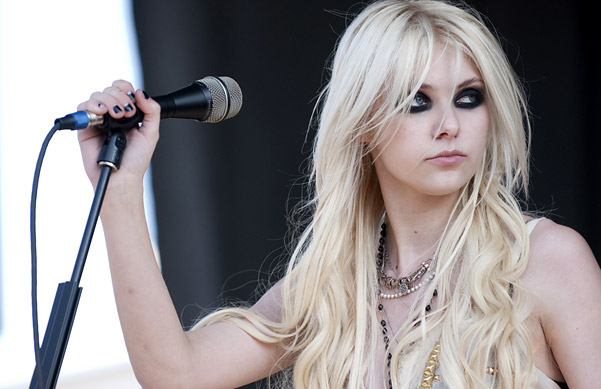 You'd never know it from her Goth-girl eyeliner, oh-so-skimpy dress, and black thigh-high stockings, but Taylor Momsen is just 16. The singer-actress (Jenny Humphrey on "Gossip Girl," but you knew that, right?) turned more heads than she did dazzle ears in the 30-minute set, but her quartet's workmanlike grrl-rock, indebted to trailblazers like Joan Jett, fit right in among the 88 bands that played Warped's opener. "My Medicine" works as a morning-after-a-bender anthem, and the Pretty Reckless' squeezed every bit of angst out of its new single "Make Me Wanna Die," which featured Momsen at her vamping, and belting, best. 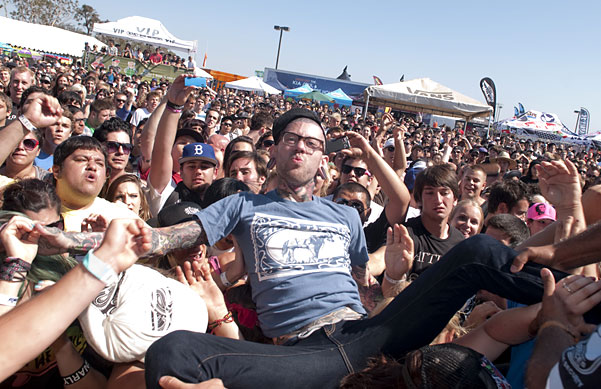 The North Carolina hardcore sextet blazed through a side-stage set with only the screams of Dennis "Denny Diablo" Lee to unsettle the nerves, but the train came off the rails as the half-hour wound down. Just as Lee announced the closer, "Apology," a blast of feedback blew back every strand of hair in the crowd. Lee took it in stride: "You didn't expect us to be professional, did you?" 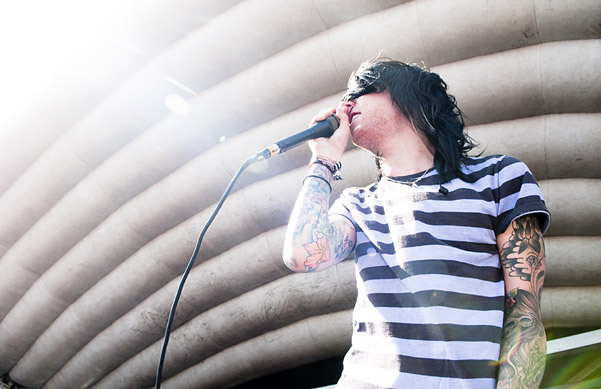 Much to the dismay of the fresh-faced young girls hanging on the rail (not a dude in the bunch), the set of keytar-addled emo from Colorado's Breathe Carolina was cut short. "We lost out drummer in L.A. last night," screamer Kyle Even explained. "He's in jail for D.U.I. … He fell asleep in his car last night, woke up drunk this morning, and tried to drive." So it was only four songs for the Fearless Records sensations, who make bouncy electro that counterposes Even's ear-shredding growling with co-frontman David Schmitt's cloying, melodic crescendos. The squirt gun Even wielded was welcome relief in the late-afternoon sun, as was the T-shirt worn by a male fan on the fringes of the crowd: "Tell Yr Gf 2 Stop Texting Me." 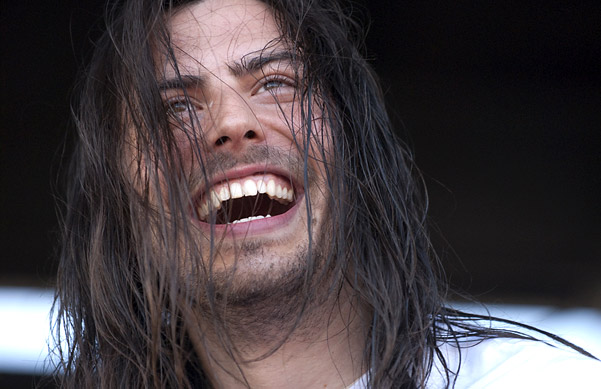 Prep-schooler-gone-bad-boy Andrew W.K. advertised an air-conditioned tent on the midway where fans could stop by, cool off and hang out for a mid-afternoon meet-and-greet. All fine, except for the AC, which hadn't cooled anything as of 2 p.m.. Mr. W.K.'s dinnertime set delivered on his now-clichéd promise to have a good time, however. Fronting a band that looked like the ensemble cast from a sitcom set in a Jiffy Lube, he took the stage to chants of "It's time to party," and, wearing a T-shirt that read "Party Hard,"he played his 2002 hit, "Party Hard." We get the message, dude. Then he removed the T-shirt (revealing another with his his name on it, of course) and tossed "Party Hard" to a happy fan. By the end, though, more people had left the party than joined. 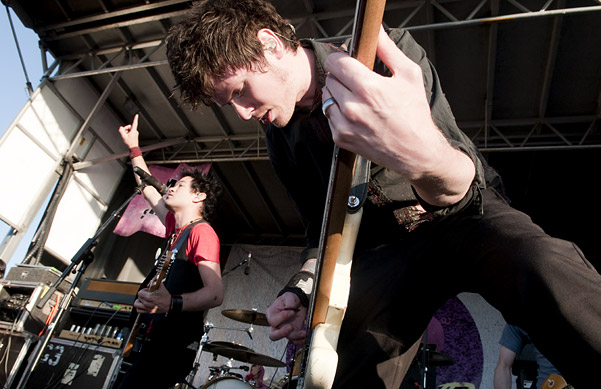 When Sum 41 burst into its bratty punk rock-cum-metal, it was as if an explosive device went off beneath the crowd. Fans pogoed, moshed, banged heads, crowd-surfed — and it still wasn't enough for nimble frontman Deryck Whibley, who spent as much time playing the fans as he did the songs. A couple of crowd-surfers were pulled onstage (tip: best chance of getting noticed is to wear your Sum 41 T-shirt), and plenty of water was thrown off the stage, but neither the cramped quarters nor flying fluids could keep fans from pounding the pavement for set-ending numbers "In Too Deep" and "Fat Lip." In sum, a clinic in crowd-pleasing.

8.Best Performance While Being Flipped Off: The Rocket Summer 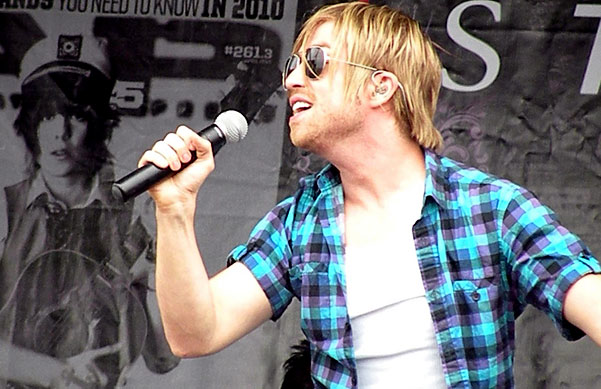 Stephen Bryce Avary makes bursting-at-the-choruses power-pop songs and delivers them in a tenor so optimistic you'd swear it could lift fog. He was giving a worshipful side-stage crowd a tour of the sweet stuff on his new album "Of Men and Angels" when the natives at the adjacent stage, awaiting the start of Sum 41's set, started getting restless. Some voted for the Rocket Summer's to end with their middle fingers; others just started chanting "Sum 41" even as Avary played his final song. Give him credit: He went down smiling. 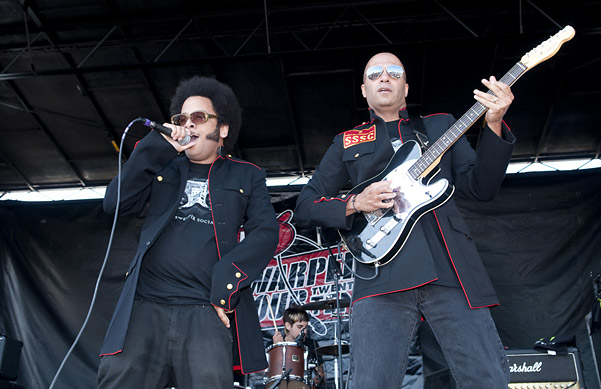 "Sometimes after a performance," frontman Boots Riley told a too-modest throng at the main stage, "people will tell me, ‘You guys are hella tight, but your guitarist tries to hard to sound like Tom Morello.' I say, ‘Hell, our guitarist is Tom Morello.'" Yes, that was a real live guitar god onstage, bedecked like his bandmates in a black waistcoat bearing an "SSSC" patch. Riley's soulful sermonizing (which included a cover of MIA's "Paper Planes") eventually sold the crowd on the quintet's rap-rock, but it was Morello and his guitar who stole the show. He flicked it, he picked it, he licked it; he played one solo by tapping one string and changing the tone with the tuning peg. And lest anyone think Morello was an anomaly at a crassly commercial festival geared to mall punks – after all, is this not the machine we should be raging against? – he took a time to deliver a message. "We are interested in feeding the poor, fighting the power and rocking the fuck out," he said. "And after we're done, I want everybody to stop by the Amnesty International tent." 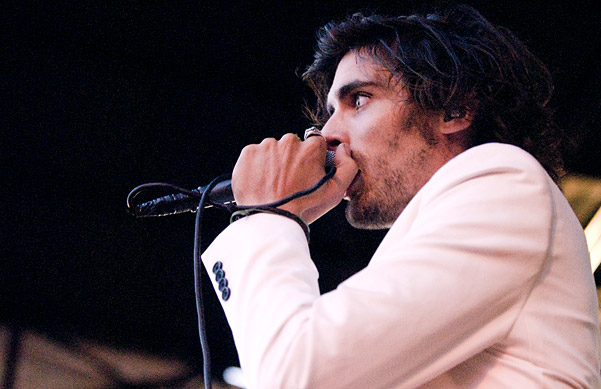 The All-American Rejects' crisp set of pop-punk seemed almost adult compared to much of the juvenilia that filled Warped's stages on opening day, but that doesn't mean the Oklahoma-bred band's crowd was. An overwhelmingly female, surprisingly young, and unanimously adoring crowd welcomed Tyson Ritter with squeals when the Rejects hit the stage at dusk, and the frontman, nattily attired in a white suit, did not disappoint. "Hey dirty girls," he cooed," I wanna see you get on somebody's shoulders." And many did, swaying and swooning while the Rejects ripped through their parade of hits. In fact, if 2005's "Dirty Little Secret" were any more successful as a come-on, there might be warrants issued. 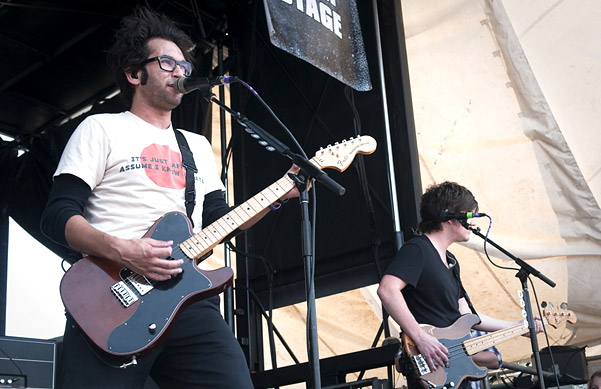 The blazing early-afternoon sun did little to discourage Warped Tour veterans Motion City Soundtrack or their fans, who bounced and thrashed while singer-guitarists Justin Pierre and Joshua Cain made the most of their croon-then-explode dynamic. Maybe Pierre was saving his pipes for the long tour, but he beckoned fans to fill in the blanks on 2003's "The Future Freaks Me Out," and they did so happily. Jesse Johnson turned his synthesizer into a weapon of destruction on "Her Words Detroyed My Planet," and by the time the quintet finished with "Everything Is Alright," the afternoon was off to an all right start indeed. 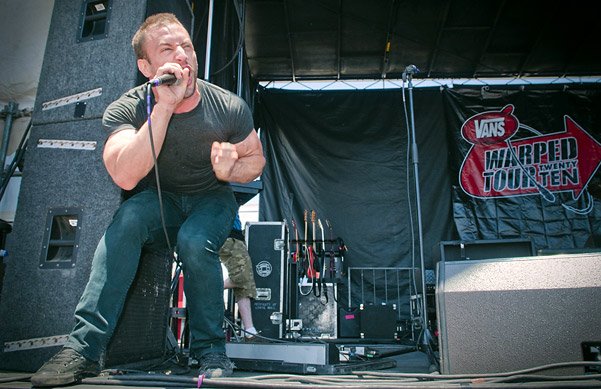 One thing New Jersey hardcore veterans Dillinger Escape Plan did not need was more energy drinks. But vocalist Greg Puciato — when he wasn't screaming from atop the stacks of speakers — kept popping open cans of the stuff, taking a swig or two and hurling the half-full missiles into the crowd. Best moment came after a piercing rendition of "Roomful of Eyes," when Puciato lobbed a can all the way into the mosh pit, where a young fan made a one-handed, over-the-shoulder catch. And then took a drink himself. There were plenty of guitar licks to wash down — it was as biting and blistering a 30 minutes as you could find at Warped's opening day, the band's heat exacerbated by the early-afternoon sun. It was one reminder that, because set times at Warped are decided daily by blind draw, early arrival is almost mandatory. Besides, as Puciato reminded fans, "It's feel good to fuckin' rock at 1 o'clock, doesn't it?"

13.Best Set by Veterans of Warped Tour I (and II, III and IV): Face to Face 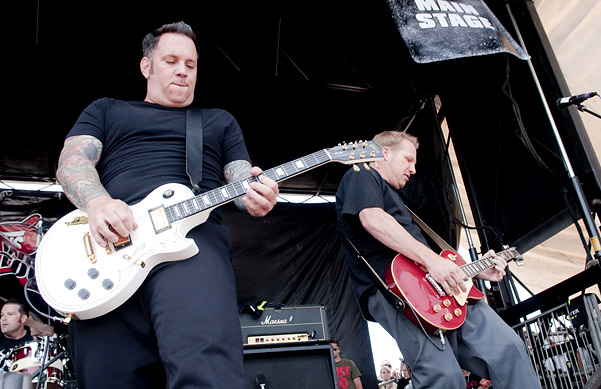 Leave it to some black-clad middle-agers to take Warped back to its punk-rock roots: Face to Face, just short of its 20th birthday as band, played a roaring half-hour to crowd-surfers, midday moshers, and fist-pumping fanatics from two generations – yeah, that was a father and son grinding in the pit to "You've Done Nothing." When he wasn't teaching the newbies in the crowd the punk-proper "Whoa-oh-ohs," frontman Trever Keith announced the band would soon be releasing its first album in eight years, "Laugh Now, Laugh Later." The elicited a big cheers, but not as cacophonous as the sing-along for the band's 2006 hit "Disconnected." Buoyant.