He talks about his long awaited solo album, naming his shark "Billy Ocean," and thumb-wrestling. 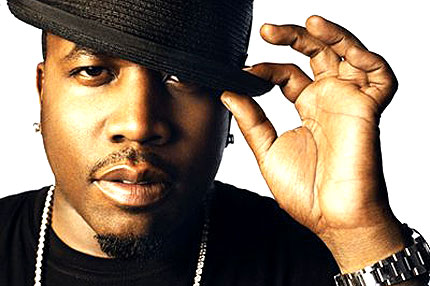 Back in 2006, as OutKast was coming off a dizzying run that saw five consecutive studio albums hit No. 2 or higher on the Billboard chart, André 3000 and Big Boi announced that each would put out solo records before releasing their next joint project.

Four years and one Who’s Your Caddy? later, Big Boi (né Antwan Patton) is finally ready to set that plan in motion — and silence any breakup rumors — with Sir Lucious Left Foot: The Son of Chico Dusty, featuring collaborations with B.o.B, T.I., Jamie Foxx, and, yes, André 3000. The 35-year-old Atlanta rapper called us to discuss the long-awaited record from a hotel room in New York City, where he was “just grinding it out, doing interviews, and having fun.”

Playa and dawg? Awesome.
Bless you. Now, what you got for me, man?

How about if we talk about the new album? We’ve been hearing about it since at least 2008. Why the long wait?
It’s a label thing. My album’s been done now for, like, over a year, but it hasn’t come out due to differences of creative expression with Jive Records. The guys at Jive were gracious enough to let me come back over to L.A. Reid and do what I’m supposed to do.

You’re talking about L.A. Reid, now the head of Def Jam, who originally signed OutKast to LaFace Records back in 1992.
Yeah. It feels great to be back with him. To be back with someone — my mentor — who understands my music and gave me creative freedom.

But OutKast are still on Jive. Doesn’t Jive deserve some love?
You know, Jive has nothing to do with OutKast’s career whatsoever. L.A. Reid signed OutKast originally, when we were 16 years old. He helped catapult our career to where it was when we were acquired by Jive [in 2004].

Hmmm…Did Reid send you a fruit basket welcoming you to Def Jam?
Not this time, but for years he’s been sending them to me. But no need — it’s Def Jam, man. I’ve loved them since I was just a baby, since the days of the Beasties and LL [Cool J] and Run-DMC. Just being part of that family now is like a dream come true, almost.

Congrats, then. The album introduces us to Sir Lucious Left Foot, one of your many personas. But you’re right-handed! Yeah, but my left is my good foot. How about that? Look, the whole Left Foot thing is about leaving imprints wherever you go. When I leave a room, it’s gonna be footprints of funk wherever I stepped, because I’m a soul-funk crusader.

I see. You also go by Billy Ocean. Have you ever met the real Billy Ocean?
I did, a long time ago. He was real laid-back. Watching TV back when I was younger, I remember “Caribbean Queen” coming on all the time. I thought it was really gangsta how he had a Jheri curl and a glitter suit and a bow tie. That shit was so pimpish to me. I named my shark Billy Ocean.

Your what?
My shark. I call it Billy Ocean. I have an aquarium in my house.

Wow. You’re living in a different world than most of us. You still have the fur coat you’re wearing on the cover of Speakerboxxx, don’t you?
Yes. It’s a fox fur. I still wear it on occasion, when it’s cold outside. Didn’t want to kill all them foxes for nothing. I mean, shit, you might as well, you know what I’m saying?

Totally. Def Jam is calling this your debut solo record, but wasn’t Speakerboxxx really your first?
That was definitely mostly me. I did most of the writing on it, just like it is with this one here. So Speakerboxxx was a solo album as well. But because it was packaged together with The Love Below, that made it an OutKast work.

Speaking of which, how often do people say, “Where’s the next OutKast album?”
Very frequently. But when I do interviews and they ask where the OutKast album is, I have to tell them it’s top-secret information, and that me and André 3000 will have to put something to your temple if I say something about it. We made a pact that we will not disclose any information until it’s about to come out.