In the Studio: Of Montreal

Kevin Barnes on working with Solange Knowles and Janelle Monae, and rap music's influence on the new album 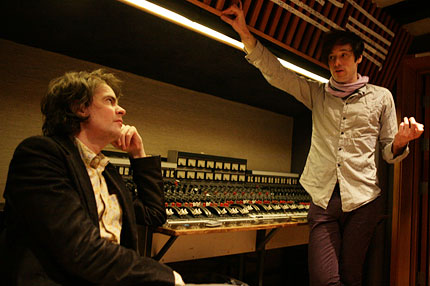 For the first time in their 14-year career, Kevin Barnes and Co. ditched the budget home studios they used to record much of their catalogue, and hit Los Angeles’ high-tech Ocean Way Recording, where the Beach Boys, Frank Sinatra, Radiohead, and the Rolling Stones have made albums. Barnes tells SPIN.com that the band hired offbeat L.A. superproducer Jon Brion (Kanye West, Spoon) to help create their most hi-fi album yet, while continuing to push their genre-smudging, experimental sound.

Below, Barnes talks about working with Solange Knowles and Janelle Monae, rekindling his side-project with Andrew VanWyngarden of MGMT, Blikk Fang, and the newest addition to Of Montreal’s eclectic sound: “trunk-rattling booty bass.”

Hey Kevin! How’s Los Angeles treating ya?
It’s good. But I’m living the vampire lifestyle since I’m working at night. I could be anywhere and it would be the same.

What’s the status of the new Of Montreal album?
We’re totally done tracking and about halfway finished mixing. We’re still ironing it out, but it looks like 14 to 16 songs will make the album.

You wrote some of the new songs while drunk. How’d that go?
Some terrible and funny songs came out of it but I’d just send those to my brother. But a lot of the vocals — because it’s just me being by myself, drunk, at like 4 A.M. — turned out well. I didn’t have any inhibitions. It’s important for me to block out the world and to get into this insular form of life where I’m just in touch with whatever is inspiring me. It helped to bend my mind a little bit. I usually don’t drink in the winter but in the summer, I drink a bit more. The crickets were going insane outside, and I was inside the studio going insane. It was a very solitary experience but I felt like I was connecting somehow, in a different way, in a different form.

What can fans expect from the sound of False Priest?
The fidelity is going to be more massive than anything I’ve ever done before. We’re getting inspired by A Tribe Called Quest and Dr. Dre albums, and incorporating that really deep low end into the Of Montreal sound. That’s something that’s never been before. There’s a lot of trunk rattling bass. I’m really into OutKast and booty bass like 2livecrew and Ghetto Boys, plus N.W.A., Beastie Boys, Run D.M.C. I had all those in my head somewhere. I also really love 1960s and ’70s reggae, which has really great low ends. It’s amazing the way it connects with your body; it’s such a physical thing — it goes right through your body in a way that the other frequencies don’t. The album isn’t a straight up homage bass music, it’s a blend of ’70s soul, too. I was trying to think like, “If Philip K. Dick was like a black soul singer in the ’70s, what kind of songs would he write?” Or, “If William S. Burroughs was a black songwriter from the ’70s what kind of song would he write?” Others are a mix, like if the Kinks were to collaborate with Sly Stone, and Isaac Hayes was the producer and Brian Wilson was involved, too.

Tell me about a few songs specifically.
There’s one called “Godly Intersex” and another called “Famine Affair.” They’re abstract lyrically. I’m thinking of William S. Burroughs a lot. I’ve only read Queer and Junky but somehow I feel like I’ve connected to what was inspiring him. It’s very free form and I want the character that I invented, Georgie Fruit, to have balance with a slightly more intellectual influence. There needs to be duality.

Beyonce’s sister Solange appears on the new album. How did that come together?
When I wrote a new song called “Sex Karma,” I thought it would be cool if it appeared on her record. I sent it to her and for a while that was the plan. But I really liked it and changed my mind, and we decided to record it as a duet. Which works because the lyric “You look like a playground to me, player,” is funny for a guy to sing. I didn’t know if I could pull that off.

There are reports of a collaboration between you and Beyonce. What’s up with that?
Nothing yet. If I wrote a song that fits for her and she was into it, I definitely would be happy. But nothing is in the works.

Atlanta R&B starlet Janelle Monae is making on appearance on False Priest.
Yep. The track is called “The Enemy Gene.” It has sci-fi elements. I’ve been reading a lot of Philip K. Dick and thinking about the future — people have a dark vision of it.The track is about technology robbing us of our organic connection to nature. It has a complex, semi-abstract story. Meeting Janelle and her Wondaland Arts Society crew is one of the greatest things to happen in the past year. There’s a weird disconnect between Athens and Atlanta. I didn’t really know any Atlanta musicians, but in the last few years I met Bradford Cox from Deerhunter and the Wondaland Arts Society, and it’s a beautiful artistic romance. They’ll send me mixes of songs, and vice versa. They’ve been a huge influence and inspiration on me. We’ll definitely work together a lot more in the future. There are a lot of ideas in the works and those will probably be something we focus on a lot over the next year.

How did you end up working with producer Jon Brion?
A friend of his turned him on to our music and soon he mentioned Of Montreal in an interview, so I got in touch. We hit it off right away. He had this vision: “Man, I could definitely help you, I can see what your doing. If we worked together we could create something really cool.” So, I tracked the album one instrument at a time in my home studio in Athens. Then I came out to L.A. and played it for Jon, and we tried to figure out how to improve the fidelity and decided which instruments we could add. We re-tracked bass guitars, electric guitars, and some pianos at Ocean Way. Jon really helped — it benefits me to have someone around with an engineer’s mind as well as a producer’s mind because there’s a lot that I overlook when I’m recording and experimenting with compositional techniques.

Last year Susan Sarandon joined Of Montreal onstage in New York and spanked members of the band with a ruler. That was random.
We have a mutual friend and her son is an Of Montreal fan. He turned her on to us. She’s been in Rocky Horror Picture Show and tons of cool movies, so we figured she’d be up for doing something weird. We invited a skit based around her as a teacher that sees these two pigs misbehaving, grabs one pig by the ear, bends it over her knee, and spanks it. It’s really interesting to realize that this famous actress is just like you — creative, artistic, excited about off the wall things. We might do some more collaborations onstage.

Any plans to revive Blikk Fang, your side-project with Andrew VanWyngarden of MGMT?
We’ve been talking about it, but timing is tough: they just released their record and I’m recording frantically. It’s just a matter of finding time. We both really want to make it happen. Even if the songs never get released, it’s fun to work with someone that you respect a lot and have a lot in common with. We’ve already written a bunch of unrelased songs together and hope to develop those more.

William Goodman
Tags: In The Studio