"I just had sex at Harvard," she told the Boston crowd to explain being three hours late. 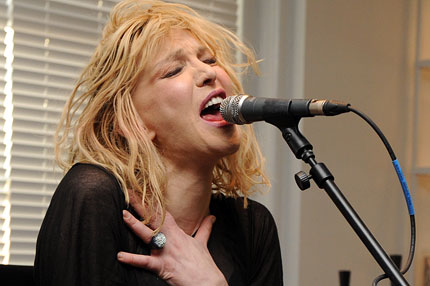 Arriving three hours late to her acoustic gig at the Ames Hotel in Boston on Wednesday, Hole singer Courtney Love got inventive with her excuse: She told the crowd she was coming from Harvard — and she wasn’t at the Ivy League university to pick up an honorary doctorate!

“I went to Harvard to see an old boyfriend and I stayed for a while,” she said. “He’s a first year professor there now.Do I have a glow?I just had sex at Harvard!”

Later she admitted, “No, I didn’t have sex at Harvard. It was a good excuse and sounded really inappropriate.”

Watch her antics in the clip below, as well as footage of her performing Hole’s “Pacific Coast Highway” and “Boys on the Radio” during the five-song set, organized by Boston indie station WFNX.

Let us know what you think of Love in the comment section!