L.A. rockers pay homage to the 1960s with their The Ed Sullivan Show-style video for "Change." 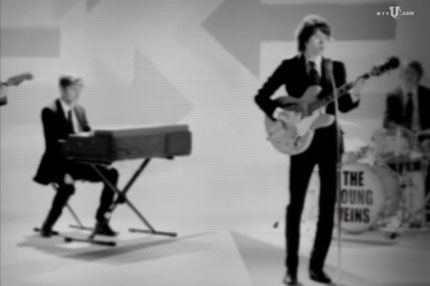 Panic! at the Disco offshoot Young Veins channel the Kinks, the Beatles, and the Zombies on their debut album Take A Vacation!, but with their music video for “Change,” the quintet take their ’60s admiration one step further by paying tribute to The Ed Sullivan Show, the TV variety series that first introduced many of these bands to America. Watch below!

In the black-and-white clip, vocalist-guitarist Ryan Ross and Co. dress in matching suits, play vintage instruments (like Ross’ old school Epiphone hollow body guitar), and toss their moptop hairdos about as they perform. “Some things never change, they just stay the same,” Ross sings. Well, at least in their music video they do.

Young Veins — who recently spoke to SPIN.com about their band name — are touring the U.S. this summer behind their debut album. See their complete itinerary here.

What do you think of the Young Veins’ music video for “Change”? Tell us in the comment section below.

William Goodman
Tags: panic at the disco, the wire, The Young Veins, Videos