The Dr. and Hova rap about drugs, Tiger Woods, and gun-toting NBA star Gilbert Arenas on "Under Pressure." 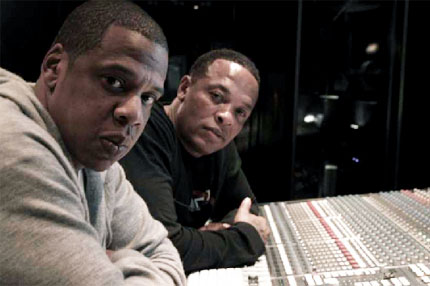 Back in April, Dr. Dre confirmed the existence of “Under Pressure,” a new track featuring Jay-Z that’s expected to appear on the Dr.’s long-awaited album Detox. There was even a photo of the duo in the studio to prove it. Two months later — a millennium in hip-hop time — a version of the song appears to have leaked online. Listen below.

Like many hip-hop leaks, “Under Pressure” — unveiled by New Music Cartel — seems to have hit the web in an unfinished condition, clocking in at just 2:28 and glaringly lacking a hook. Otherwise, the track is an upbeat club-ready jam with deep beats, icy Kraftwerk-esque synths, and lyrics about partying and drug use.

“Maybe it’s a relapse / Maybe I’m high right now / Where the weed at?” spits Dre. Hova reciprocates: “I’m out of control / I’m having trouble cleaning up / I’m like FEMA, ” and, “I’m in the party up to no good / I should be duckin’ the clubs, Tiger Woods.” He also drops rhymes about Washington Wizards player Gilbert Arenas, who was caught “bringing a gun to work.” Considering the pop culture references, the track had to be recorded in 2010 — but perhaps released a little too late?

What do you think of Jay-Z and Dr. Dre’s “Under Pressure”? Tell us in the comment section below.