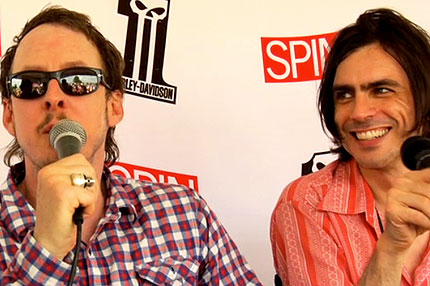 While the stages raged Saturday at the Bonnaroo Music & Arts Festival in Tennessee, fans were treated to intimate interviews at Harley-Davidson’s tent, where some of the weekend’s biggest stars stopped by to chat with SPIN.com’s Peter Gaston, answer audience questions, and ride motorcycle simulators.

Brian Bell and Scott Shriner of Weezer talked about their World Cup-themed song, “Represent,” and coming up with clever ways to connect with their fans; Norah Jones remembered playing the first-ever Bonnaroo in 2002 and discussed the rockin’ tunes on her new album; and the Avett Brothers, who drew a large crowd of adoring fans, described working with superproducer Rick Rubin and hinted at forthcoming new material.

Watch the interviews below, and click here to see more video interviews with the Flaming Lips, the Gaslight Anthem, OK Go, and Dr. Dog!