Flaming Lips Wow with ‘Dark Side’ at Bonnaroo!

The Oklahoma band's epic set mixes all their hits with an outsized performance of Pink Floyd's masterwork. 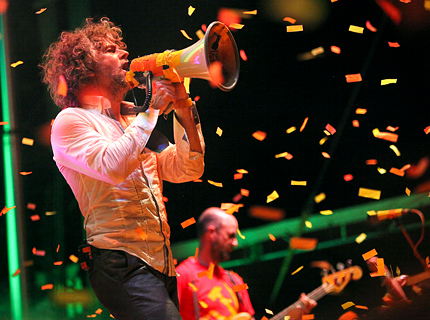 “This is the greatest fucking audience any band will get to play for, ever,” said Wayne Coyne, beaming out into the crowd from Bonnaroo’s Which Stage at two in the morning on Saturday. He probably says at every show, but he almost certainly means it every time.

Festival-goers were treated to a double-wide set from the Oklahoma psych-pop giants in a night that combined ritual, spectacle, and tribute to dazzling effect. The Lips first played an hour or so of their own songs, then, with assistance from Coyne’s nephew’s band Stardeath and White Dwarfs, performed Pink Floyd’s Dark Side of the Moon from start to finish.

The audience truly did give its all for the interactive first half, following Coyne’s lead in a round of shout-and-response that the singer conducted from the shoulders of a man in a bear suit, then punctuating “Yoshimi Battles the Pink Robots Pt. 1″ with well-timed karate chops and improvising animal noises to the menagerie of creatures named in “I Can Be a Frog.”

But what Bonnaroo gave, the Lips returned a hundred-fold. The band’s entrance alone went beyond elaborate, with guitarist Steve Drozd, drummer Kliph Scurlock, and bassist Michael Ivins descending from a door in the massive video screen, emerging from the glowing crotch of a naked, orange-hued woman. Coyne then appeared in his trademark plastic bubble and rolled out onto the audience amidst aural bombast and a hail of confetti.

“Steven and I thought we’d smell more pot at the beginning of our set,” Coyne announced after they’d played their 1993 MTV staple “She Don’t Use Jelly.” “The reason being,” he continued with a grin, “it’s Steve’s birthday.”

So the crowd indulged him and themselves, yelling the birthday song at the top of their lungs as the muggy air got even thicker with weed smoke. Even comedian Margaret Cho sang along from within the orange-suited dancers flanking the stage.

And again, the Lips reciprocated.

During “The Yeah Yeah Yeah Song,” Coyne tossed gigantic balloons that rained tickertape when popped. For “See the Leaves,” he donned gigantic foam hands implanted with lasers, which he blasted up at a pair of massive disco balls, sending green rays out into the field. Before tearing through “The W.A.N.D.,” he wore a floodlight around his neck like an accordion while wielding his trusty bullhorn, which was now gushing dense, red smoke.

The music itself was the main event for part two. After a brief intermission, the band returned doubled in size: eight fog-shrouded figures silhouetted by a huge video moon.

Their take on Dark Side of the Moon was gloriously shambolic, with walls of guitar buttressing the parts of Gilmour or Waters, accompanied by some combination of accented crooning from Coyne, Drozd, and Stardeath’s Dennis Coyne.

Huge chords verging on metal fueled “On the Run,” which crashed hard into the broad sprawl of “Time,” which in turn became a huge psych-rock freak-out that was soon recognizable as “The Great Gig in the Sky,” with Drozd doing the gospel part fair justice.

And Coyne did have one more trick up his sleeve. “Alright, Bonnaroo,” he said while reaching for another outsize orb. “These balloons have real fucking money in them.”

“Money” inspired a massive sing-along, as did “Us and Them,” which the band played from complete darkness while the combination of colorful lasers, excess fog, and 3D lyrics upped the trippy factor considerably.

The Lips brought Pink Floyd’s psychedelic opus to a close with a squall of blown-out noise that connected “Brain Damage” to “Eclipse” and brought to mind the performers’ own heavily distorted single, “Watching the Planets.”

And though the entire set stretched well over the headliners’ allotted two hours, the show was over too soon. The greatest audience ever cheered for more, but settled for singing along to a recording of Louis Armstrong’s “What a Wonderful World.” The sentiment rang exceptionally true.

SETLIST:
“Silver Trembling Hands”
“She Don’t Use Jelly”
“Happy Birthday to You” (for Steve)
“The Yeah Yeah Yeah Song”
“I Can Be a Frog”
“Yoshimi Battles the Pink Robots Pt. 1″
“See the Leaves”
“Pompeii Am Götterdämmerung”
“Taps”(for the Iraq War)
“The W.A.N.D.”
“Do You Realize??”

Dark Side of the Moon w/ Stardeath and White Dwarfs:
“Speak to Me”
“Breathe”
“On the Run”
“Time/Breathe (Reprise)”
“The Great Gig in the Sky”
“Money”
“Us and Them”
“Any Colour You Like”
“Brain Damage”
“Eclipse”

Chris Martins
Tags: flaming lips, wayne coyne, We Were There