The TV on the Radio musician hosts a record release party in L.A. for his new solo project. 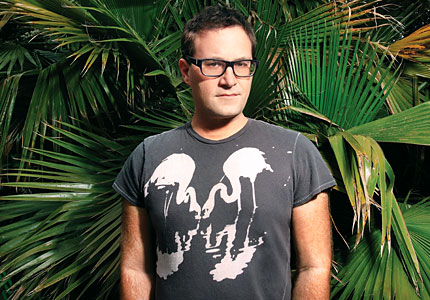 Sitek, also known for his production work with Yeah Yeah Yeahs and Scarlett Johansson, was in attendance, having moved west recently. But rather than lord over the ceremony from the comfort of one of the ultra-luxe leather seats, he floated within the crowd, mingling while his new album played in the background.

Okay, “background” might be the wrong word. To ensure the songs would be given their proper weight, Sitek carted in his own speakers, which he’s given the nickname of “the lease-breakers,” and played the album on a pink CD player with matching pink remote control.

Though pop songs essentially, these tracks were thick, noisy and wholly funky — everything you’d expect, but with more glam — and bolstered by a star-studded array of guest vocalists including David Byrne, Karen O, Little Dragon, Theophilus London, and Sitek’s TVOTR bandmates.

Sitek told SPIN he “let enjoyment be the guiding principle,” which may explain the album’s consistency despite the presence of a different singer on each track. That focus could also have something to do with the fact that under Sitek’s tutelage, each singer sounds a little like TVOTR’s Tunde Adebimpe. Of course, that could be our imagination too.

Here’s our track-by-track breakdown of the album:

“Groove Me” featuring Theophilus London
Sitek gate-crashes his own album with a fiercely propulsive track that reseats the Neptunes’ nu-disco sound within a wall of pink noise. Uplifting synth bursts punctuate funk-soul vocals from Brooklyn rapper London, who makes the song’s none-too-subtle aim known: “I want you to groove, baby.”

“Absence of Light” featuring Tunde Adebimpe
Thudding Rick Rubin-style drums and thick synth-bass fittingly accompany TVOTR’s Tunde Adebimpe as he turns in his own larger-than-life performance. The line “fly like an eagle and die like a star” looks cheesy on paper, but amidst so much dark dissonance, it makes perfect sense.

“Shakedown” featuring Kyp Malone
The pace finally slows to make ample room for Kyp Malone. The erstwhile TVOTR and Rain Machine singer stretches out his deranged Marvin Gaye impression (c. “Let’s Get it On,” of course) over sluggish, molten surges of hot groove.

“Communion” featuring Karen O
Things are still sultry when Karen O starts cooing, seemingly about being “in space.” But this is no N.A.S.A. – though some of the same guests that appeared on Sam Spiegel’s all-star album drop in on Maximum Balloon, the songs here are unerringly focused on the same goal: carving pop out of controlled chaos.

“The Lesson” featuring Holly Miranda
Sheets of harp, lumbering drums, unaffected piano hits and Sitek’s trademark arpeggiating guitar all come together on this electro-tinged track. Singer-songwriter Holly Miranda’s voice is often doubled, or bundled up into a choral mass – Sitek doesn’t do anything small.

“Pink Bricks” featuring Ambrosia Parsley
The album comes to a close with a left-field guest appearance – Shivaree singer Ambrosia Parsley (remember “Goodnight Moon” from Kill Bill Vol. 2?) – and big, seething walls of sound. The song is smooth, sexy and not a little dark, with the throaty singing eventually dissolving under the force of one final aural crush.

Chris Martins
Tags: maximum balloon, We Were There