In "First World Problem," the nerdcore rapper takes his time machine back in time -- but forgets the charger. 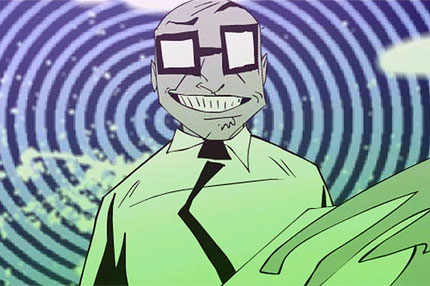 Remember that time your Blackberry updated and all your contacts got messed up and it was the worst thing ever? Yeah, well, MC Frontalot (aka Damian Hess) does, too. And the nerdcore rapper wrote a song called “First World Problem” about it on his latest album Zero Day. Check out the video below, created by Brooklyn-based animator Shawna Mills.

“I had heard the phrase ‘First World Problem’ a few years ago. It means ‘a suffering that seems absurd if compared to the average level of human suffering worldwide,'” Hess tells SPIN.com. “And it’s a way in which I notice myself spazzing out regularly, when my gadgets are incompatible… I recognize that my sense of entitlement is absurd, but I can’t shake it.”

In the animated video, Frontalot changes the tune’s struggle with his smartphone, to one with a time machine: “[F]or most songs, I enjoy a video that tells its own story independent from the song’s lyric, with maybe a conceptual anchor that ties the two together.”

A cartoon Frontalot travels back in time with a handful of gadgets like laptops, calculators, and video games — hoping to wow all the cavemen and become master of the universe. Unfortunately, the cavemen aren’t too impressed and bust up all the electronics with their weapons. Saddened and disappointed, Frontalot tries to return — only to discover his time machine’s battery died and the charger was sold separately. D’oh!

Earlier this year, Frontalot released the free MP3 for “Your Friend Wil.” Download it here.