"They would have murdered me," Em tells SPIN of the scathing song he nearly released. Get details here! 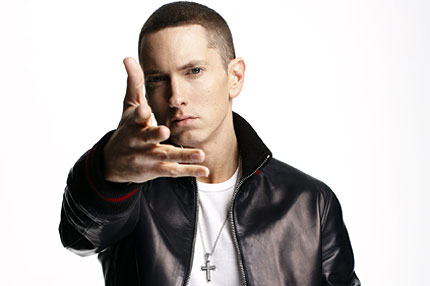 Eminem’s new album Recovery will drop on June 21, a day earlier than originally scheduled, and it will arrive with “Talkin’ 2 Myself,” a banger on which Em raps about nearly releasing a dis track aimed at Kanye and Lil Wayne.

“Talkin’ 2 Myself” stirred the web when it leaked last week, leaving fans to dissect its lyrics, including, “Anyone who was buzzin’ coulda got it / God it feels like I’m goin’ psychotic… / Are you stupid? You goin’ to start dissin’ people for no reason?” In an upcoming SPIN magazine feature, Em explains his intentions.

The man born Marshall Mathers told SPIN’s Jonah Weiner that in the summer of 2006, as he battled drug addiction, he grew jealous of Wayne.

“I thought, ‘Man, I can do that shit. He ain’t that dope,'” Em said. “I’m hearing this dude say some clever, witty shit and I’m not doing it, so I feel fucked up.” Em ultimately opted not to release the unnamed dis track. “It would have been career suicide,” he said. “They would have fuckin’ murdered me.”