Bush to Reunite in September for California Fest 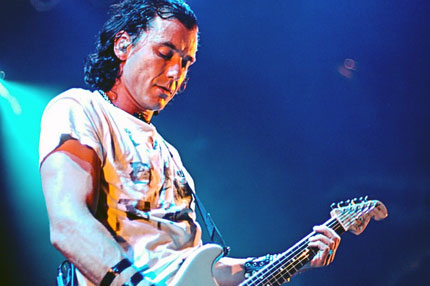 Blink-182, Eminem, and Kiss are set to headline the Fontana, California, music festival Epicenter Twenty Ten on September 25 and 26.

Cool, right? But perhaps the biggest surprise of the festival is found further down the bill: ’90s scrunge rockers Bush will reunite for their first show in nearly a decade.

It’s part of a bigger reemergence for the band, too: Frontman Gavin Rossdale stopped by KROQ in Los Angeles on Monday and premiered the group’s first song since 2001, “Afterlife” — a pulsing, uptempo grunge-y song dripping with classic ’90s Bush sound. It’s off their new album, Everything Always Now, due in October. Listen here.

After forming in London in 1992, the December 1996 SPIN-cover boys rose to fame in the mid ’90s with their debut album, Sixteen Stone, featuring the Top 40 singles “Everything Zen,” “Comedown,” and “Glycerine.” The group — recently dubbed in the pages of SPIN as the “ultimate scrunge band” — went on to record three more studio records before their breakup in early 2002.

Since Bush’s demise, Rossdale, 44, who is the husband of No Doubt’s Gwen Stefani, released an album with a new band called Institute in 2005, and a solo album, Wanderlust in 2008.

What do you think about the Bush reunion? Tell us in the comment section below!