The indie kings cruise in a convertible and hang poolside with bikini-ed babes -- all while dressed like George Washington! 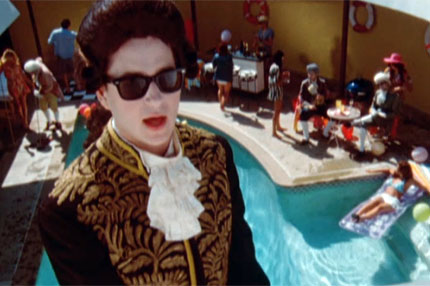 In Vampire Weekend’s just-released video for “Holiday,” the third single off their SPIN-approved album Contra, the New York indie rockers enjoy a day under the sun — all while dressed as four rosy-cheeked George Washingtons, complete with 18th-century garb: powered wigs, leg stockings, and colonial coat-tailed suits. Watch below!

In the video, singer-guitarist Ezra Koenig and the boys cruise around in a convertible, hang out poolside with bikini-ed babes, hit the drive-thru at In-N-Out Burger, and get in a tussle with a surfer dude on the beach.

Vampire Weekend aren’t afraid to have fun, but the upbeat track also boasts some politically-minded lyrics. “It’s about a member of my family who gave up meat when we invaded Iraq,” Koenig told NME of the track. “They were horrified by what was happening and they lost their taste for meat… it was a physical reaction.”

The band is gearing up for a few summer festivals, including Sasquatch Festival in the aptly-named George, Washington, before headlining their own North American tour with support from Beach House and Dum Dum Girls in August. See the band’s complete dates here.