Singer/songwriter performs tracks from In the Airplane Over the Sea at a NYC benefit concert. 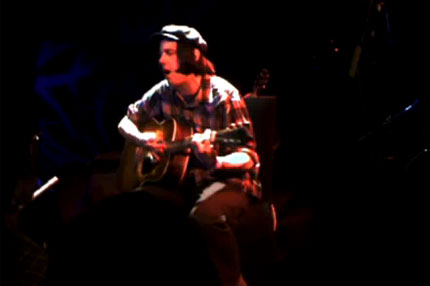 Below, watch video of Mangum strumming tracks from his band’s adored 1998 release, In the Aeroplane over the Sea, including “Two-Headed Boy” and “Oh, Comely.”

Mangum’s rare live performance was part of a benefit show for New Zealand musician Chris Knox (Tall Dwarfs, the Enemy, Toy Love, Flying Nun Records), who had a stroke last year. 400 or so fans snatched up $75 tickets for the show, which also featured performances from TV on the Radio’s Kyp Malone, Yo La Tango, and more.

Fans captured indie rock’s J.D. Salinger playing his five-song solo set. Watch video below, then tell us what you think in the comment section.

Setlist:“Oh Comely”
“A Baby for Pree”
“Two Headed Boy Pt. 2″
“In the Aeroplane Over the Sea”
“Engine”

“A Baby for Pree/Where You’ll Find Me Now”