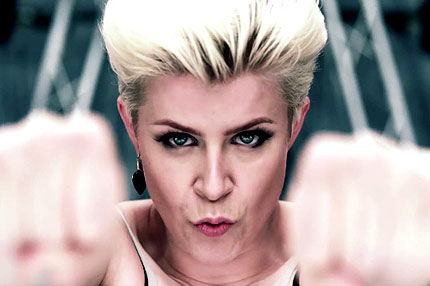 “Dancing On My Own,” the second single off Swedish electro popstress Robyn’s upcoming, SPIN-approved new album Body Talk Pt.1 gets the visual treatment. Check it out below!

In fact, the song title dictates the action in the video: Robyn breaks it down on an empty soundstage and also by herself, alongside a packed dance floor, strobes flashing and couples kissing around her.

In concert with her video release (and in support of the new album, her first since 2005’s self-titled affair), Robyn announced yesterday that she’ll be touring the U.S. with edgy R&B singer Kelis via a series of cutesy Twitter exchanges. Sample exchange:

Robyn: Hey mama, I’m bored. U feel like doing something?
Kelis: Love to. Thinking it’d be fun 2 hit the road together?

No dates yet, but confetti and lasers have been promised!

Watch the video and tell us what you think of “Dancing On My Own”!

WATCH: Robyn, “Dancing On My Own”