The rebellious frontman Tom Gabel gets a beatdown from the police in the new clip. 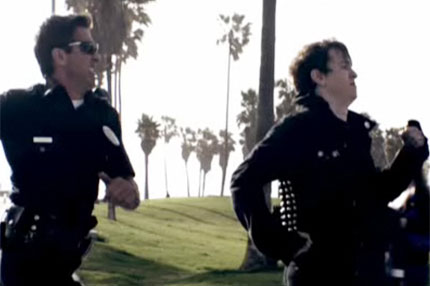 Against Me! frontman Tom Gabel fought the law and the law won. Or did they?

The Floridian punk band just released a new video for “I Was A Teenage Anarchist,” the lead single from their June 8 release White Crosses, and it shows Gabel running from the cops on a palm tree-lined boardwalk, getting apprehended, and then finding himself on the wrong end of a cop’s baton.

Luckily for Gabel, bystanders eventually step-in to stop the officer’s excessive force, and Gabel makes a second get-away, only to be caught once again and thrown into the back of a cop’s cruiser. It appears the law won — but the rocker is flashing a huge, bloody grin.

The video — the second for the rousing track; the first was unveiled exclusively at SPIN.com — is the perfect accompaniment for the tune: a catchy anthem in which Gabel reflects on his younger years as an anti-authority punk.

Against Me!, “I Was A Teenage Anarchist”

Luke McCormick
Tags: against me!, the wire, Videos