Christina Hendricks blasts into outer space in the latest clip from James Mercer and Danger Mouse! 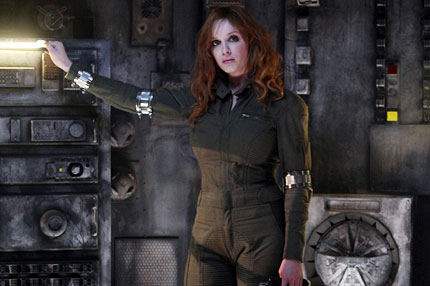 It’s the ultimate seal of approval when one of the hottest women in the universe, Mad Men star Christina Hendricks, doesn’t just like your band — but wants to appear in your new video.

The redhead, who plays Joan Holloway in the acclaimed TV series, will star in Broken Bells’ upcoming clip for “The Ghost Inside,” from the duo’s (James Mercer, Danger Mouse) self-titled debut. While there isn’t a release date set for the video, Entertainment Weekly scored some photos from the set, including an image of Hendricks — who plays a “beautiful android” — standing in an otherworldly, desert-like landscape, and another of Mercer and Mouse sporting space suits.

Mercer explained the collaboration to EW: “We assumed we would ask and that’d be it. She’s got to be so busy, and who the hell are we? But she said yes! Turns out she’s a fan of our record.”

Tell us what you think in the comment section below.