"It will be interesting to see how well received it is," drummer Nathan Followill says of the band's upcoming release. 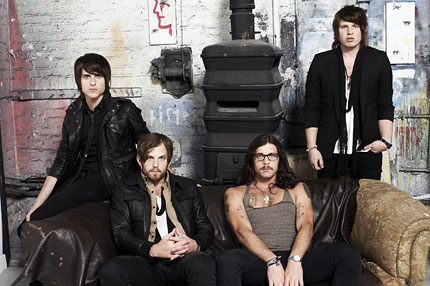 Tennessee rockers Kings of Leon will hit the road this summer on 32-date North American tour, including a stop at their home state’s Bonnaroo music festival June 11. What can fans expect from the SPIN cover boys live in their own backyard? Lots of new material from their follow-up to 2008’s Grammy Award-winning release Only By the Night!

“The record is coming along great,” drummer Nathan Followill said during a Bonnaroo press conference today. “It will be tough to not play the whole [new album] at Bonnaroo. We’re going to try to be very selective of what we play, but there will definitely be some new tunes.”

KOL have been in the studio working on their new album since the beginning of April — but this time around, the boys switched things up.

“[It was the] first time we ever recorded in New York City and we thought we’d come out with a darker record because we’d done all our records in either Nashville or Los Angeles where it’s a little more chilled out,” Followill says. “[But] I’ll be damned if we didn’t go in there and make a fun record! It’s got songs that are beach-y and songs that are a little more like our Youth & Young Manhood days. We’re super excited. It will be interesting to see how well received it is,” he added.

The band will hit Bonnaroo’s What Stage on Friday, June 11, for a two-hour set. Check out the festival’s full schedule at Bonnaroo.com.

Excited for new music from Kings of Leon? Tell us in the comment section below.