The guitar whiz talks about her fifth album, Junior -- and about staying green. Watch below! 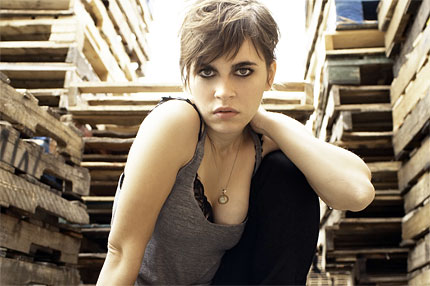 While guitar whiz Kaki King crisscrosses the country, hard and heavy, in support of her excellent fifth album, Junior — her band is inspired by their experiences abroad to make less of an impact on the environment.

“Having been on tour in countries that are extremely eco-friendly, we automatically end up doing the things that normal people do in other countries,” she told SPIN backstage at New York City’s Bowery Ballroom. “We always recycle what’s in the van. We just don’t waste things. If we get food at the venue, we bring it with us.” Watch her entire interview and performance footage below! It’s from the Green Room — a new series of exclusive video interviews, presented by SunChips and their new sustainable initiative.

King stands to have loads of leftovers in her van this year with a busy touring schedule behind Junior, which SPIN’s Jessica Hopper called “just the thing for still-mourning Sleater-Kinney fans or anyone who likes their licks righteous and their indignation more so.”

“The manifesto of making the record was ‘Keep It Simple,'” King said of the album, which she recorded with her bandmates Jordan Perlson and Dan Brantigan. “I felt almost like I was making a record for the first time.”

King is on the road through May. Check out her official site for the full itinerary, and watch her Green Room interview below!