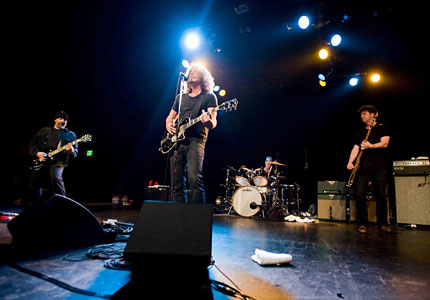 You guys last played Lollapalooza in 1996. Do you have a sense of how the festival has changed since then?

Thayil: There used to be a lot of camaraderie between the bands when it was a traveling festival. I don’t know if that can happen when it’s site specific.
Cornell: From the lineup, it looks like there’s a little bit of everything, which was always part of the Lollapalooza idea.

Does knowing that you might be playing in front of Lady Gaga fans or MGMT fans change the way you approach the performance?

Cornell: I don’t think it would be possible for Soundgarden to try to come up with a set list that would appeal to Lady Gaga fans. Maybe what we wore would be different. I would be interested to see, for example, what Kim might wear.
Thayil: A Devo flowerpot hat.

How’s rehearsal been going? Did the muscle memory kick in, or have you had to completely relearn the material?

Cornell: It’s been interesting. We started digging up songs we hadn’t played since, like, 1989, and it turns out that time isn’t as much of a factor in remembering a song as is how much we played it live. I remember stuff from Louder Than Love way better than I do from [1996’s] Down on the Upside because we toured so much more behind it.
Thayil: Yeah, the greatest things are the songs that we haven’t done since the late ’80s. You start into it, and all of a sudden you’re like, “Oh, yeah. This kicks ass!”