Minneapolis rapper crafts beats and rhymes on the spot in our NYC office. 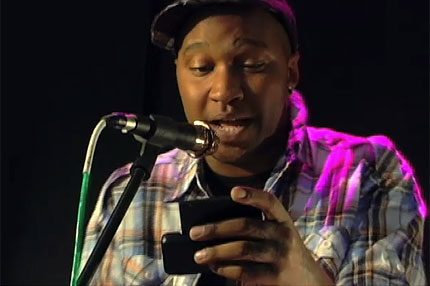 We’ve invited dozens of performers to join us for stripped down performances over the years, but since “unplugged” doesn’t exactly translate to hip-hop, only a few brave souls have attempted to make it happen. P.O.S. has risen to the challenge — twice. Watch his most recent performance below!

After wow-ing us with an a capella performance at the SPIN/MySpace Loft during SXSW ’09 (with friends creating backing beats with plastic cups on a table behind him), Stef Alexander, aka P.O.S., recently visited SPIN’s NYC office and decided to make up a new song on the spot.

“I’m gonna make a super simple beat,” the Minneapolis-based rapper told the assembled crowd of staffers, “and then I’m gonna read a verse that I just finished writing for you all, SPIN.” And sure enough, he cobbled together a sampled groove on a beat box, pulled out his cellphone (where he typed up his lyrics), and dropped a rhyme for a never-before-heard jam.

Next, Alexander — who battled toe-to-toe for several weeks with hip-hop luminaries like Jay-Z and Kanye West in our 2009 Readers’ Poll — reworked “Low Light Low Life,” off his 2009 album Never Better, and engaged the audience in a call-and-response on the track’s chorus.

Watch P.O.S.’ SPIN Session below — and catch him live May 30 at the Soundset Festival, presented by his own record label, Rhymesayers, in the Minneapolis suburb of Shakopee.