The Canadian pop rockers return with a catchy new tune from their upcoming album. 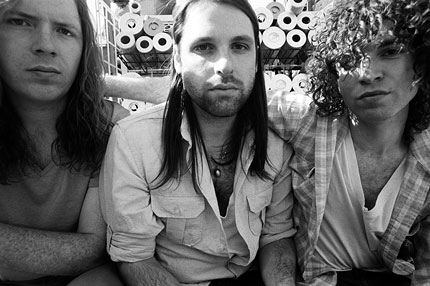 Hot Hot Heat broke through in 2003 with a song called “Bandages,” about the injuries suffered from a relationship gone bad. But now the Vancouver band’s long suffering frontman Steve Bays is in love, and he’s singing about it on the new song “Goddess on the Prairie,” from the upcoming album Future Breeds (out June 8) — download it below!

“It’s the first positive love song I’ve ever written,” Bays tells SPIN.com. “I wrote it shortly before getting engaged — and it’s the only song on the album written from my own perspective.” Better yet, he sings about love over an infectious guitar riff that recalls “Turning Japanese” by one-hit wonder the Vapors.

The band had recorded a different-sounding take of “Goddess” earlier in the album sessions, but they scrapped it. “The original version of this song had more of a minimalist ’60s dance-y feel to it, but we felt it didn’t feel ‘Hot Hot Heat’ enough, so we re-recorded it live off the floor,” says Bays. “We liked the second version more ’cause it felt like, energy-wise, it was the missing piece to Future Breeds’ puzzle.”

The album is available for pre-order now via Amazon, iTunes, and on vinyl via the band’s label, Dangerbird.

Also, check out a behind-the-scenes video about the making of “Goddess on the Prairie” here.