Electronic music master gets a boost from Thom Yorke, inspiration from the Coltranes. 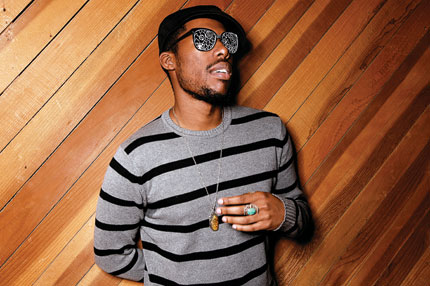 On the day we meet with Steven Ellison, the 26-year-old laptop genius better known as Flying Lotus has spent the better part of the morning at home in L.A.’s hip Echo Park neighborhood practicing scales on the piano. “I like that I don’t have to plug it in to play,” says the soft-spoken beat-master — curious words coming from a man BBC Radio 1 DJ and electronic music tastemaker Mary Anne Hobbs dubbed “the Hendrix of his generation.”

When he’s not tentatively tickling the ivories, the SoCal native is creating some of the thorniest music around. Though Ellison got his start composing bumpers for the Adult Swim network, the first two Flying Lotus albums — 2006’s classic-hip-hop-indebted 1983 and 2008’s further-out Los Angeles — drew notice from experimentally inclined listeners, including Radiohead’s Thom Yorke, who invited Ellison to remix In Rainbows’ “Reckoner.” The relationship has continued, with Yorke asking the younger musician to open this year’s Atoms for Peace tour and contributing vocals to “…And the World Laughs With You,” off Flying Lotus’ new Cosmogramma (Warp).

That collabo is just one of the album’s many interstellar high points: “A Cosmic Drama” playfully shoehorns together whiplash drum breaks, free jazz skronk, and celestial harp runs, while “Do the Astral Plane” bubbles over with trip-hop thumps, alien orchestral crescendos, and fat synth bass. At all times, the music evokes a vessel lurching through deep space. “I’m into psychedelics and astral traveling,” explains Ellison.

Such otherworldly notions befit Ellison’s pedigree — his great aunt was jazz harpist/spiritual beacon Alice Coltrane (John’s second wife), whose portrait looms over his mixing desk. But an even bigger influence was his cousin Oran Coltrane, who opened his mind to new sounds. “When I was a kid, I just wanted to be Dr. Dre,” recalls Ellison, slated for two shows at Barcelona’s prestigious Sonar festival later this month (he played Coachella in April). “But Oran played me Igor Stravinsky, and it just blew my mind. Then it was on.” So, might a hybrid of The Chronic and Rite of Spring lie ahead? “I still have a bajillion ideas for where I want the music to go next.” We’ll be following.