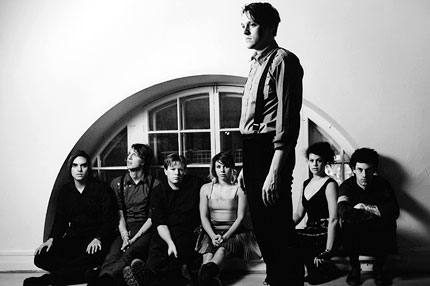 And so it begins. The march towards one of 2010’s most anticipated albums will start within “a few weeks,” when the Arcade Fire will release a 12″ single, according to a post on their website.

“Howdy yall,” the band says in a handwritten postcard addressed to “The Internet” that appears on their newly refurbished official website. “Just finished up pressing our new 12″. Should be in stores in the next couple weeks. God willing. Good luck with finals. See you this summer!”

While the band isn’t revealing the song title themselves, the single will apparently be called “Suburbs,” with a b-side titled “Month of May,” according to a listing on Amazon.com — which has been removed since this article was originally posted. The vinyl version is available for pre-order with a June 1 release date, although it’s listed as an import title.

The one thing that we can confirm is that the Montreal-based band will play 12 gigs around the world this summer, where they’re expected to roll out new material, starting with a headline gig June 30 in Rättvik, Sweden, about 200 miles from Stockholm. They’ll hit three more European festivals before making their 2010 North American live debut at Ottawa’s Bluesfest on July 13. Their sole American date, at the moment, is August 8 at Chicago’s Lollapalooza.

There’s still no official release date for the band’s third studio album, their first since 2007’s Neon Bible, which was SPIN’s No. 2 Album of that year.