The 10 Best Moments of Rock on the Range 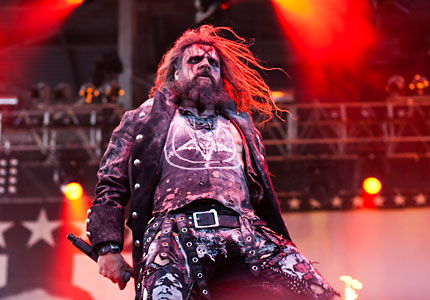 Now in its fourth year, Rock on the Range 2010 fit 38 bands with hard rock and metal leanings into the two-day fest, packing the yellow and gray-tinted expanse of Crew Stadium in Columbus, Ohio, with thousands of fans. Headlined by Godsmack and Limp Bizkit, the concert contained all the details that define the festival atmosphere: a wave of empty plastic Budweiser bottles, belligerent local sports fans, bad tattoos, crass t-shirts, people looking for weed in the men’s bathroom, a smattering of bare breasts, and bizarre characters (like the guy wearing only boots, a robe, and Spongebob Squarepants underwear). Music-wise, here’s our take on what made this noisy weekend worth the visit.

See our photo gallery of the Fest here >>

BEST GRATUITOUSLY PROFANE AC/DC COVER: PUDDLE OF MUDD
When Wes Scantlin hits a stage, expect curse words to flow without pause. The Puddle of Mudd frontman introduced himself by saying, “What’s up, you crazy motherfuckers?” Through Puddle’s enthusiastic set, Scantlin would ask the same query in modified format (“What’s up, all you crazy motherfuckers out there?” being one of the variations) and frequently request to see everyone’s middle fingers. Sandwiched between Puddle standards like “Blurry,” “Schizophrenic Psycho,” and “She Hates Me” (plus the new “Stoned” or, as Scantlin calls it, “I Wanna Get Fuckin’ Stoned”) was a pretty decent take on “TNT,” AC/DC’s revved-up classic. In keeping with his salty tongue, he changed “So don’t you mess around” to “So don’t you fuck around” and channeled Jesse of TV’s Breaking Bad by pointlessly tacking “bitch” onto “Out for all that I can get.” Eventually, the song descended into muddled racket, but the end came cherry-topped with Westlin offering an extra “Fuck you!” for good measure.

BEST ZOMBIE PARTY: ROB ZOMBIE
“And our motherfucking zombie party begins!” announced Rob Zombie after his first handful of songs, addressing the giant crowd that gathered around the main stage for Rock on the Range’s penultimate act. His show was all about ambiance, utilizing a set-up that incorporated prop skeletons, majestic bursts of fire, swirling psychedelic patterns, flashing pentagrams, horror movie clips (including his own work from House of 1000 Corpses), and figures goofing around in giant Predator-style outfits. Roaring like an overlord, the leather-clad and devilishly charismatic Zombie bellowed all his finest material: “Thunder Kiss ’65,” “Superbeast,” “Scum of the Earth,” “More Human than Human,” and the excellently tongue-in-cheek “Mars Needs Women.” Zombie’s ambitiously colorful set was the highlight of the entire festival.

BEST UNEXPECTED DISPLAY OF THEATRICS: HALESTORM
Big fests like Rock on the Range offer the ideal opportunity to boast a beefed-up live show – a notion that Halestorm made good on in surprising fashion. Before singer-guitarist Lzzy Hale’s body appeared, her voice – a gothy mixture of Joan Jett and Whitney Houston – filled the Kicker Stage with American Idol-style vocal acrobatics to start “It’s Not You.” Once she and her band appeared, the spectacle got enormous: the drummer played one portion with oversized sticks that could have doubled as police batons, Hale lifted a glass of wine in memory of Dio (drinking it dramatically at the turning point of a song), and the entire four-piece performed an instrumental using modified trash cans as drums. If any band deserves a bigger stage (and an even bigger production) for an outing at ROTR next year, it’s these alt-rockers.

BEST AGING FRONTMAN: HELMET
Compared to the ballyhoo delivered by other groups at Rock on the Range (garish make-up, pyrotechnics, crazy costumes, Papa Roach pointing out its helicopter circling above the crowd), Helmet’s set at the small Jägermeister Stage was workmanlike. Wearing the standard rocker clothing of t-shirts and jeans with few accessories, they were focused on playing out toasty alt-metal riffs as powerfully as possible instead of amusing their audience. Among other tracks, the New York group steamrolled right through “See You Dead,” “Birth Defect,” and “Unsung.” Granted, none of their songs particularly stood apart from one another, but Helmet’s presence added some class to the bill. Looking particularly venerable was head honcho Page Hamilton, who took a minute to introduce “In the Meantime” from 1992’s Meantime, asking the crowd in front of him, “I’m not sure you guys were even born then, were you?” before affably adding, “I just turned 50, thank you very much.” Half a century old or not, Hamilton is still great at what he does.

BEST UNDERSTATED VOCAL PERFORMANCE: DEFTONES
Deftones have always waded deep into atmospheric gloom, and their Rock on the Range showing was no exception. Leading the charge was Chino Moreno, whose voice only slammed and slashed when it absolutely had to (like while violently shrieking “Guns! Razors! Knives” during “Rocket Skates”). Largely working with material from Diamond Eyes, their latest, the act made sure that when the oceanic guitars and keyboards crested, they did so with a concussive clap. Moreno spent little time interacting with his listeners, but when he did, he usually had something noteworthy to add, like raising a red cup to Chi Cheng, the Deftones’ still comatose bassist, before going into “My Own Summer (Shove It).”

BEST CELLO SHREDDING: APOCALYPTICA
At first glance, Apocalyptica isn’t that unordinary of a metal band: its members have long hair, Finnish origins, and tattoos. There’s also a skull in their logo. However, team them with their instruments and prepare for symphonic metal fireworks. With bows whining and sawing across the strings of three cellos (drums also smashed away in the back), the quartet ran through vocal-free Metallica covers and originals like “I Don’t Care” and “I’m Not Jesus.” Leader Eicca Toppinen took “shredding” literally, snapping a string after just a few songs. Even though the audience didn’t know what to make of them (nor Toppinnen asking “Are you ready for some real metal?” with a great European accent), they lent the mostly lowbrow Rock on the Range a dose of grace.

BEST MIDDAY FREAKOUT: CIRCA SURVIVE
Pennsylvanian post-hardcore act Circa Survive took the midsized Kicker Stage as Sunday’s afternoon sun shone relentlessly. Like Anberlin (who would follow them), Circa’s emo-leaning sound already made them an oddity on this hard rock/metal-centric bill, but its vocalist’s antics set them apart even further. “Who here is dehydrated?” asked Anthony Green, taking the stage. “Let’s get real dehydrated, alright?” When the band ripped into the moody “Get Out,” Green went bonkers, spastically clapping and shaking with the drum beats, moving like a shaman in a religious frenzy. Somewhere around that time, he began rambling about the crowd melting into each other and how he was starving. (One attendee’s prognosis: “He’s tripping!”) The heat and his hunger must have hit him during “Stop the Fuckin’ Car” because as Circa’s guitars gazed off into loopy psychedelics, Green’s eyes rolled into the back of his head. Once the track was finished, he was left with a “Here’s Johnny!”-esque grin on his face. Later in the performance, while teasing the crowd, he unintentionally explained all his babbling: “People with microphones are always full of shit.”

BEST MUDDY FREAKSHOW: MUSHROOMHEAD
When Helmet played the Jägermeister Stage on Saturday, a patch of rain-made muck out front stood as a soggy mess. By the time Mushroomhead came on to a packed house a day later, the disgusting paste got everywhere, mostly spread from the shoes and pants of crowd surfers to the people that hoisted them up. The Cleveland band did make it all worth the hassle: Cloaked in a bizarre bunch of masks and make-up (most notably, one singer was coated in fake blood and would have made a pretty good Leatherface), Mushroomhead’s industrial-tinted metal prowled and roared, degenerating from slow-burn angst into full-on spazz-outs. Most thunderous was the percussion: two guys banged on two sets of drums (in addition to the main kit), impressively striking a spray of water into the air with every beat – only adding to the grime.

BEST INDULGENT GUITAR WORSHIP: SLASH
It’s not often that an entire band revolves around a guitarist who doesn’t sing (going as far as to slap his name across the bass drum’s head), but Slash is a worthy exception to the rule. Decked out in top hat, shades, and flowing locks (as if he ever wears anything else), the ex-Guns N’ Roses player was undeniably (and justifiably) the star of the set. Supported by Alter Bridge singer Myles Kennedy and a competent trio of instrumentalists, a good portion of the songs came from his recent solo debut. Wherever there was room, he’d be sure to toss in a fret-jumping solo, reeling in extra cheers from a crowd thirsty for his theatrics. Those hoping for GNR nods were sated: “Nightrain” and a thrillingly tight version of “Sweet Child O’ Mine” appeared (Kennedy’s voice is a dead ringer for Axl) as well as closer “Paradise City,” which even saw Slash hopping around a little bit.

BEST INTRODUCTION DONE BY GENE WILDER: LIMP BIZKIT
For a while, things didn’t look too hot for Limp Bizkit at ROTR. After Rob Zombie wrapped up, a small army headed for the exits of Crew Stadium. Adding to the inauspiciousness, the band went on 20 minutes past its announced start time – a bad sign for a festival close-out performance. Then, the stage went black, the remaining audience (still large) went crazy and, in a strange turn, “Pure Imagination” from Willy Wonka & the Chocolate Factory started going over the PA. (Its star Gene Wilder and Limp Bizkit aren’t two names you’d expect to see together.) When Fred Durst & Co. finally showed, the crowd was pumped enough to lead one to imagine that Bizkit’s initial popularity never subsided. The four-piece raged through “Show Me What You Got,” “My Generation,” “My Way,” and others, unintentionally revealing that, despite his awful lyrics, Durst can really deliver on a growls (he nailed the “You wanna fuck me like an animal” in “Hot Dog”). While Bizkit definitely had more juice than expected, the ceremonies would still have been better concluded with Zombie.

Reyan Ali
Tags: rock on the range, We Were There

More Maynard for Your Money: Both Tool and A Perfect Circle Are Playing Rock on the Range 2018