Lumberjack costumes & chainsaws are a thin cover for the duo's ode to weed, "That Tree." 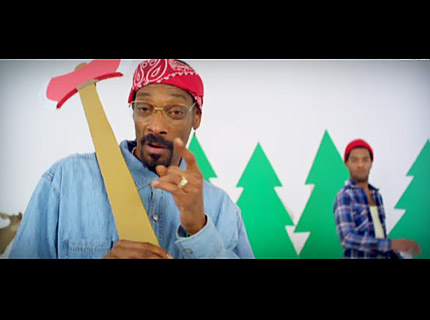 Despite its proximity to Earth Day (April 22), don’t think for a second that the release of Snoop Dogg’s new video for “That Tree” is some sort of eco-friendly awareness missive. Oh, it’s a green initiative alright — but one that’s more about burning plants than planting them. Watch the clip below.

Joined by “Day ‘n’ Nite” rapper Kid Cudi, Snoop offers up a rather joyous, giddy ode to the sticky icky — and the video finds the duo (and a backing duo of cuties) dressed in lumberjack garb, harvesting “trees” in a set made of giant paper cut outs. Think South Park, but even more rudimentary in its minimal, grade school-level of animation.

And while their younger fans might not get the joke, Cudi and Snoop’s costumes mirror those worn by Cheech and Chong, respectively, in the stoner classic Up in Smoke.

Check out the video below, and tell us whether you think it’s the chronic or plain old schwag.