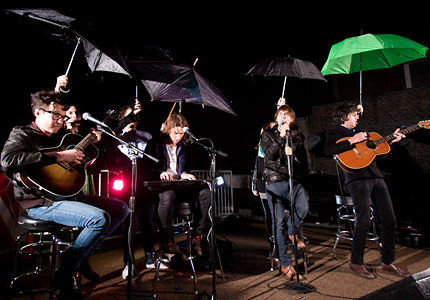 To celebrate the release of SPIN’s 25th anniversary issue, staffers and 150 lucky music fans headed to our Manhattan rooftop for a pair of surprises: an acoustic set from Phoenix and an unexpected downpour. But the Grammy-winning French popsters didn’t let a little rain keep them from performing spot-on versions of “1901,” “Lisztomania,” and “Rome.”

Watch video of the set below — complete with umbrellas!

With their equipment en route to Coachella, the boys played a stripped down set with acoustic guitars and mini keyboard, lending an intimacy to the big pop jams off their 2009 smash, Wolfgang Amadeus Phoenix. And as the rain increased, fans — who enjoyed beverages from AriZona and Corona — opened umbrellas to cover the band members, who were perched on four bar stools on a makeshift stage. Phoenix were in high spirits, despite the sudden weather.

“This is the best place to play,” singer Thomas Mars said during the set. He was serious — it wasn’t the first time Phoenix have rocked SPIN’s home turf. Back in December, the band played an equally memorable indoor set. (Watch here.)

Read our full review of Phoenix’s rooftop set here, and be sure to catch up on SPIN’s 25th Anniversary features — including the 125 Best Albums of the Past 25 Years and the 25 Moments That Rocked Our World.