EdVed and Mike McCready cover John Lennon and the Who for Coco's 47th birthday in Seattle. 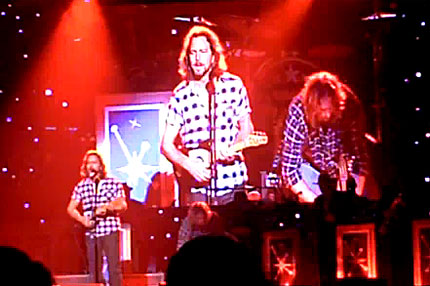 Vedder took the stage solo with a mandolin and ukulele (“small instruments create the illusion that you’re tall, which is completely shattered when you’re next to Conan,” EdVed quipped) to perform “Rise,” from his Into The Wild soundtrack, and John Lennon’s “Oh Yoko” (with tailored lyrics, “Oh Conan”). Then McCready and the former Tonight Show band joined Vedder to play the Who’s classic tune “Baba O’Riley.” Watch video of all three below.

The birthday boy seemed overjoyed by the addition of Pearl Jam, who were the first band to perform on the short-lived Tonight Show with Conan O’Brien. He took to Twitter to express his glee: “Eddie Vedder’s set at my show in Seattle.. melted my eyeballs. Seriously, I’m going to sue Eddie for boiling my ocular-jelly.”

Sound off in the comments section.