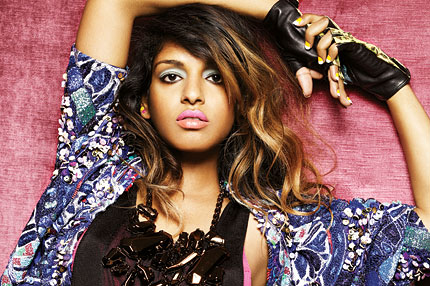 The clip, directed by Frenchman Romain Gavras and already removed from YouTube due to its graphic nature, is a high-quality, nine-minute epic that plays more like an HBO mini-series than a music video. A Los Angeles SWAT Team invades a low-income housing unit, beating residents (some naked) in their search for a redheaded twentysomething boy. Once captured, he’s loaded onto a prison bus full of other redheaded boys and transported to a government compound in the remote desert.

Then it gets really graphic.

A youngster no older than 13 is shot point-blank in the head, and the redheads are forced to run across the desert so the SWAT Team can use them for target practice. “Born Free,” which dropped online just last week, only adds to the frantic intensity with its distorted and propulsive bass, blitzkrieg rhythms, and M.I.A.’s mesmerizing and echoing vocals. Stream the song via M.I.A.’s record label, N.E.E.T.

Watch the “Born Free” video below, then tell us what you think in the comment section.