The rocking trio heads to the dessert for their latest clip off of last year's 21st Century Breakdown. 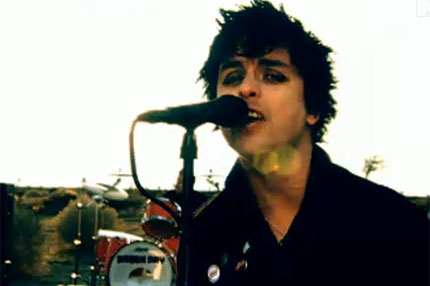 Judging by their new video, you wouldn’t know that it’s Green Day’s 2004 album American Idiot that’s about to become a Broadway musical, not last year’s 21st Century Breakdown. The clip for 21st Century song “The Last of the American Girls” is super catchy and packed with plenty of set-for-the-stage imagery. Watch it below.

Directed by frequent Green Day collaborator Marc Webb, the clip follows a day in the life of a girl played by Lisa Stelly (you might remember her from Green Day’s video for “21 Guns”). While the band jams out nearby, our protagonist wanders about in a desert landscape that’s set up with furniture, like an apartment without walls. Paradoxically, while frontman Billie Joe Armstrong is belting out lyics about an American girl with steadfast beliefs and a go-getter spirit, our girl looks bored and aimless.

The video is just one of many new developments in the Green Day camp. Not only did they recently announce a summer tour, but the American Idiot musical is currently in previews on Broadway. It opens April 20, but SPIN got an early peek when it premiered in Berkeley, California, last fall. Check out photos and a review of the show here.

Even before the curtain rises on Broadway, Tom Hanks is rumored to be in talks to bring the musical to the big screen.

For now, it’s “The Last of the American Girls” that’s getting a big premiere. Tell us what you think in the comments below.

WATCH: Green Day, “The Last of the American Girls”