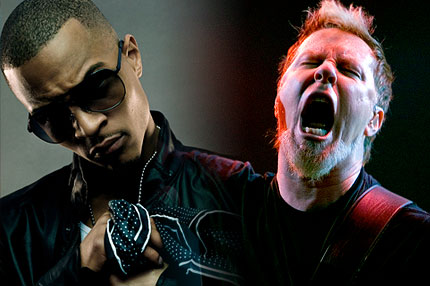 Convicted gun aficionado T.I. sparks controversy by speaking at a middle school assembly. “Yo, Teach, will you hold this 9 milli while I talk?” [World Star Hip/Hop]

Ex-Clash manager Bernard Rhodes honors the late Malcolm McLaren by shouting “He was no saint!” at his funeral. The clouds parted and McLaren said, “I’m flattered.” [The Observer]

Ben Lee contributes a song the World Wildlife Fund, which strives to teach about the human race’s devastating impact on earth. Lee added, “Have you seen my Hummer? It’s sick!” [Vimeo]

Ludacris is hosting a new contest seeking rap songs with lyrics about Magnum Condoms. “They’re not just for sex — I wear mine every time I leave the house,” he rhymed. [The New York Times]

Metallica’s James Hetfield is robbed by a Moscow waiter, who charged him double for his steak. “I thought this was Russia, not NAPSTER!” said the rocker. [Prime Time Russia]