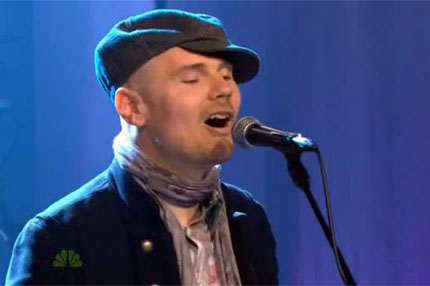 Smashing Pumpkins played material off their 44-song boxset Teargarden by Kaleidyscope for the first time live on national television Tuesday night. Frontman Billy Corgan recruited a nine-member vocal group to back the band.

The performance of “Widow Wake My Mind” on The Tonight Show with Jay Leno comes just days after the group played an intimate gig at a Los Angeles record store, and marks the first time SP’s new drummer, Mike Byrne, has appeared with Corgan and Co. on TV. Thankfully, the band rose to both occasions.

Corgan led his alt-rock group through the well-crafted pop-rock song — one of SPIN’s favorites to release from Teargarden yet — with precision. Sounding more like Corgan’s short-lived side-project Zwan than classic Pumpkins, the core five-piece band fleshed out the song’s funky verses and dreamy interludes, as Byrne laid a steady beat, coming off like a seasoned road dog rather than a dude fresh out of high school. Meanwhile, the backing vocal ensemble provided a church-choir feel to the tune’s rising harmonies.

Tell us what you think in the comment section.