Rock fans get not one -- but two! -- records before their official May 4 release date. 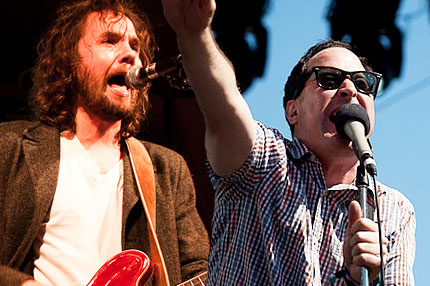 Both the new Hold Steady and Broken Social Scene albums are streaming on NPR’s website before their official May 4 release. To listen to the Hold Steady’s release click here; for BSS, click here.

After splitting with keyboardist Franz Nicolay in January, the new record from Brooklyn-based rockers the Hold Steady, Heaven is Whenever, finds the band honing “their ballsy bar-band philosophizing with a focus worthy of CSI,” according to SPIN’s upcoming review. Guitarist Tad Kubler has said that the songs are “guitar-heavy,” but fans can still expect the emotional-heft the band is known for: “I think it has to do with the way that love can help us rise above our modern struggles,” frontman Craig Finn said of the Whenever’s concept.

Both the Hold Steady and Broken Social Scene are currently on tour and are slated to appear at the Sasquatch Festival in Washington State May 29-21.

Tell us what you think of the albums in the comment section below!