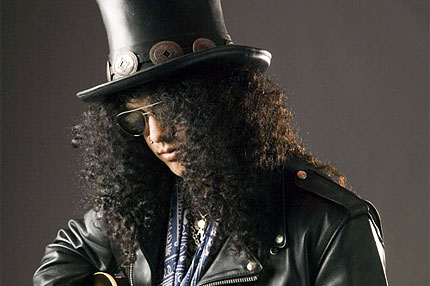 Former Guns N’ Roses axeman Slash still has a few days before his first solo album drops in stores next week, but fans don’t have to wait any longer to hear it. The self-titled record is available to stream online now. Listen to Slash here.

Boasting an all-star lineup of guest vocalists, including Ozzy Osbourne, Fergie, Iggy Pop, and Kid Rock, Slash ended up being quite the challenge for the famed guitarist. “It was very stitched together,” Slash told SPIN. “It was fun, but kind of crazy. If I’d known about the obstacles I was going to have in making this record, it might have deterred me from doing it.”

But now that the album is good to go, Slash can focus on other things — like the upcoming music video for first single “By the Sword.” Originally revealed at a benefit concert last November, the track was officially released two weeks ago and features vocals from Wolfmother frontman Andrew Stockton.

Fans with a particularly adventurous spirit can get it in the fun, too: Slash and Stockton are looking for 75 extras to take part in the down-and-dirty moshing scenes of their video, which will film on April 9 and 10 in Los Angeles.

So, have you listened to Slash? Tell us what you think — and which collaboration is your favorite — in the comments section.