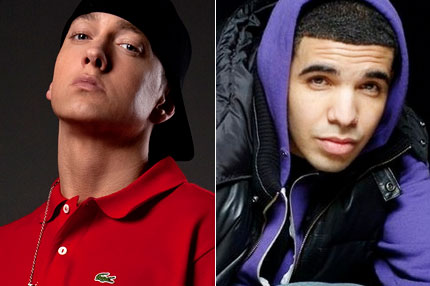 After dropping hints on Twitter earlier this week, Eminem has officially released his brand new single “Not Afraid,” while sometime-collaborator Drake is also out with a new track called “Find Your Love.” Listen to both new songs below!

“Not Afraid” is the first single from Em’s much-buzzed new album, Recovery (out June 22), and it seems like a new direction for the Relapse rapper. Produced by Boi-1da, the song is a far cry from his usual roast of pop-culture icons and searing wordplay. Over a scratchy drum beat and understated piano, Em gets optimistic, reflecting on his past while looking ahead: “I’m standing up, I’mma face my demons,” he raps, “I’ve had enough, I’m so fed up / Time to put my life back together right now.”

Up-and-comer Drake isn’t one to be outdone. The second single off his much anticipated debut, Thank Me Later (out June 15), is produced by none other than Kanye West. The radio-ready “Find Your Love” finds the MC singing over a mix of piano and danceable drum beats. The lyrics are obviously directed to the lady in his life: “Refuse to be forgotten / I took a chance with my heart / And I feel it taking over / I better find your loving / I better find your heart,” he raps.

Drake cites producer West as one of his main inspirations: “He has one of the best ears in music, period,” he told MTV. “I’d even go as far as to say he’s the most influential person, as far as a musician, that I’d ever had in my life.”