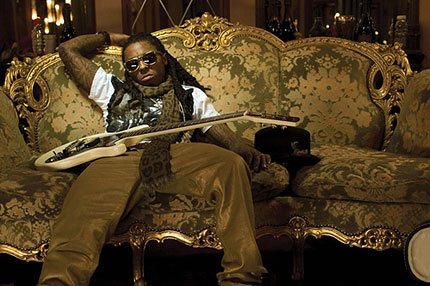 Eight more months in prison aren’t enough to keep Lil Wayne away from his fans. The rapper, who is currently serving a weapons possession sentence at Rikers Island in New York, launched a brand new website today to keep in touch with his friends and supporters until he gets out in November.

“I want all of you to know that I appreciate all the mail I get, and this is my way of saying thank you,” Lil Wayne said in his first entry on weezythanxyou.com. “If I could, I’d write each one of you back.”

Although Weezy isn’t allowed internet access while in jail, his handwritten letters will be transcribed weekly by members of his team — and he promises to respond to as much fan mail as he can.

In his first post, Lil Wayne gave sincere shout-outs to three to three fans who had written to him, making sure to mention each by name. “I wish you nothing but the best for you,” he wrote to one SoCal fan. “Earning your Masters in Library and Information Science is beautiful.” Yes, that’s Lil Wayne, big-upping a librarian.

His first blog entry has already resulted in hundreds of reader comments, and the rapper’s encouraging fans to keep them coming: “Keep sending the letters and I promise to keep responding,” he wrote. “No matter what they do to erase me, my love for you will always be permanent.”