"Some of the [new] songs I've heard are going to be crazy," said Akon, the "Telephone" star's label boss. 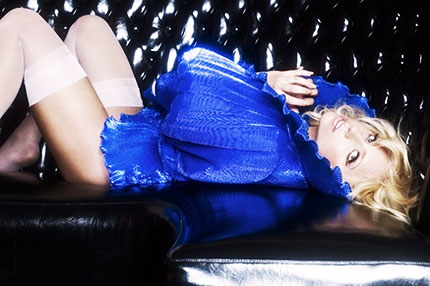 Lady Gaga is preparing to return with a follow-up to her smash debut, The Fame, and according to Akon, the R&B star who signed Gaga to his Kon Live record label in 2008, the “Poker Face” pop star’s new music is “bigger and better” than anything she’s recorded to date.

“She records while she’s on the road,” Akon told Vibe of Gaga. “I’m flying out to Europe to work on some new records with her. Gaga’s just like me. She has a tour bus with a studio in it. Some of the songs I’ve heard are going to be crazy.”

Akon also praised Gaga’s individuality and artistic vision. “All I’m doing at the end of the day is listening to the tracks Gaga has written and approving them for her album,” he added. “She has producers that she works with outside of myself and they are coming up with some incredible records. But the beauty of it is she knows exactly what she wants. So it just makes it easier for me.”

Gaga is already on track for another banner year. She’s selling out her Monster’s Ball tour worldwide and recently set a record with her music video “Bad Romance,” which has become the most watched video in YouTube history with nearly 180 million visits.

In addition, she is scheduled to headline Lollapalooza this August in Chicago’s Grant Park alongside Green Day, the Strokes, and reunited grunge rockers Soundgarden.