How They Became… Mastodon

The pre-eminent metal monsters shares the story behind their name. 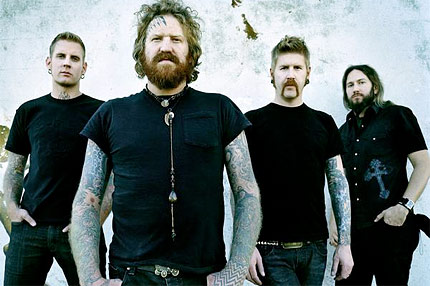 This week: metal maestros Mastodon, who kick off a spring tour April 16.

Why Mastodon: “We were sitting around at my apartment putting our little brains together,” recalls guitarist Bill Kelliher, “when [guitarist-singer] Brent [Hinds] looked at the Bantha skull tattoo on my arm — that’s a symbol that you can see on Boba Fett’s arm in The Empire Strikes Back — and he said, ‘What’s the name of that creature that’s like a prehistoric elephant?’ I replied, ‘A Mastodon?’ We all looked at each other and said, ‘That’s it, that’s the name.’ We knew right then and there.”

Previously Rejected Names: “We had a list of a lot of names. Let’s see, we had Abra Cadaver, Everyday I’m Dead, Savage Hamper, Rabid Taxi, and Fishy Joe and the Pickles.”

Best Band Names Ever: “The Jesus Lizard is cool — a reptile that walks on water. Neurosis is a great name for a band, too. High on Fire, Slayer, Motorhead, and Metallica are probably the greatest names in metal.”

Worst Band Name Ever: “Our keyboardist [Rich Morris] was in this great band but they had a really bad name. As good as they were, I think that worked against them. They were called Cream Abdul Babbar. You have to be creative and really name your band something that defines who you are, like a glimpse of what’s in the package.”