"None of her music's reflective of how weird she wants to be or thinks she is." Ouch. 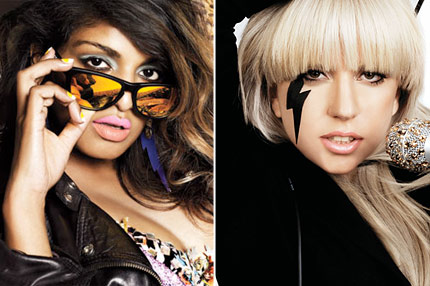 It appears there’s room for only one avant-garde pop singer in the music biz, and M.I.A. has staked her claim.

The Sri Lankan artist blasts Lady Gaga in the upcoming issue of NME (via MTV.UK), saying that any comparisons between her and the “Poker Face” pop singer are totally wack. “People say we’re similar, that we both mix all these things in the pot and spit them out differently, but she spits it out exactly the same… she’s not progressive… none of her music’s reflective of how weird she wants to be or thinks she is. She models herself Grace Jones and Madonna, but the music sounds like 20-year-old Ibiza disco.”

And Gaga isn’t the only thing in M.I.A.’s sights. The 34-year-old star said she was also invited to contribute to the soundtrack for vampire flick Twilight — which included tracks by Thom Yorke, Grizzly Bear, and Lykki Li — but had zero interest in the project. “They asked me — luckily Jimmy (Iovine, chairman of M.I.A’s US label, Interscope) had beef with the Twilight people, so he stepped in and told them to fuck off,” she said.